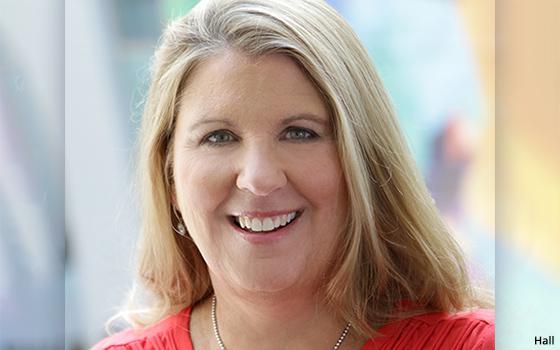 Kathleen Hall, chief brand officer and global corporate vice president of brand, advertising and research at Microsoft, is probably one of the humblest ad executives you’ll meet, even after Cannes Lion announced it will award her group this year’s Creative Marketer of the Year award in June.

“A lot of people throughout the company, around the globe and across products made this honor possible for Microsoft,” she said. “It feels mixed because I want to be in the south of France with everyone, but it’s an honor for the company to be recognized.”

While her response sounds like standard acceptance speech rhetoric, Hall spends a lot of time ensuring that she makes the most of her days to run several businesses within the corporate giant run smoothly, similar to a mini CEO.

“I do a lot of creative meetings in the morning to find out who’s working on what,” she said. “Then I meet regularly with all the heads of research, brand, and media to get a sense of what’s hot and what’s not.”

Advertising wasn’t always top of mind. Hall thought she would become a lawyer, rather than pursuing a career in advertising. Her father was a homicide detective in New York City. He had a friend in the advertising business who told her “you’d love this business.” And with more knowledge about how it works, she did.

“I love media, crappy magazines and watching 'The Masked Singer'," she said. "I’ve been in the same industry for 35 years and still love it. I found my calling."

Hall has spent more than a dozen years at Microsoft in one capacity or another. During that time the company won 11 Lions, with McCann New York’s ‘Changing the Game’ for the Xbox Adaptive Controller winning five, including a Grand Prix in Brand Experience & Activation as well as a Titanium Lion.

Then there’s McCann New York’s ‘Make What’s Next’ campaign focused on STEM for International Women’s Day, which in 2017 received a Glass Lion for campaigns addressing gender inequality; McCann London’s ‘Survival Billboard’ for Xbox /Tomb Raider, awarded 17 times in 2016; and many, many more.

She doesn’t take responsibility for all the awards, but many she saw through to fruition. Microsoft has collected Lions for a broad suite of products including Microsoft Cloud, Microsoft Kinect, Windows 7, Windows Vista, OneNote, MSN, Halo 3 Game and Xbox.

Microsoft’s award might mean more than a normal year based on the changes to the creative process caused by COVID-19. Despite the fact she’s been pleasantly surprised by the ability to concept, ideate and virtually run through the process virtually, there’s something about the physical energy about being in the room together, she said.

“Good ideas can happen anytime and anywhere through any medium,” she said. “With all the production restraints we’ve had, we have learned that you don’t need win-bang production to make a good idea sing. Look at the Mother’s Day stop or the Teams launch we did, both down and dirty.”

When asked whether the team with reconvene in person anytime soon, Hall said she’s getting her second COVID-19 vaccine on Saturday, plans to wait two weeks, and will fly somewhere.

“I’ll either go to the agency in New York or L.A., but I’m going to get together with one of the teams,” she said.