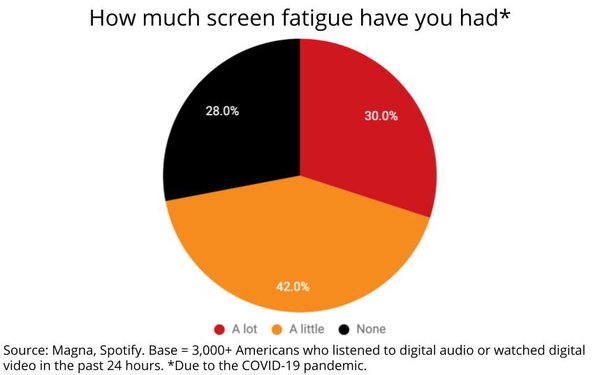 In a blatant endorsement of a media supplier, IPG Mediabrands' Magna unit has released a report conducted with digital audio giant Spotify indicating that the COVID-19 pandemic contributed to "screen fatigue" that shifted American media consumption toward audio content, especially the digital kind.

The findings -- part of a new Magna report being released today -- are based on a study of more than 3,000 Americans who listened to digital audio or watched digital video in the past 24 hours. Among other things, it found that 70% report experiencing at least some form of fatigue from viewing video screens -- 30% significantly -- with the implication that many turned to audio content to offset it.

Among those who reported screen fatigue, 42% said it is the primary reason they are listening to more digital audio, while 37% said it is "part of the reason."

“There’s no doubt the pandemic changed consumption habits and we’re clearly seeing audio and podcast listening are extremely popular right now,” Magna Senior Vice President-Intelligence Solutions Kara Manatt notes in a statement released with the report, adding: “We found it particularly interesting that people are more receptive to ads on audio. Brands should ensure they are leveraging more audio and podcasting to keep up with consumption trends and consider targeting based on moods given the impact positive moods have on listening patterns."

In terms of audio listening, the study also findings a marked shift from "non-digital" devices such as linear, over-the-air radios to digital devices such as smartphones, smart speakers, tablets and computers, pre- and post-pandemic (see below). 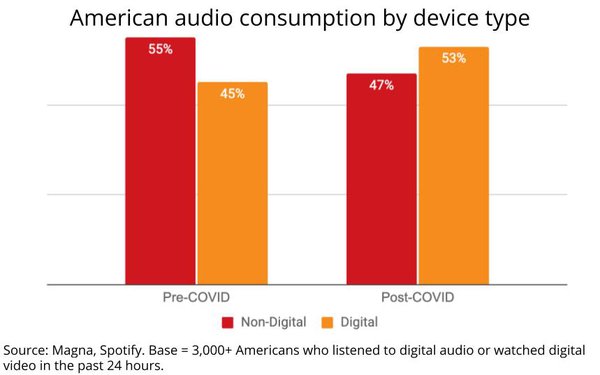