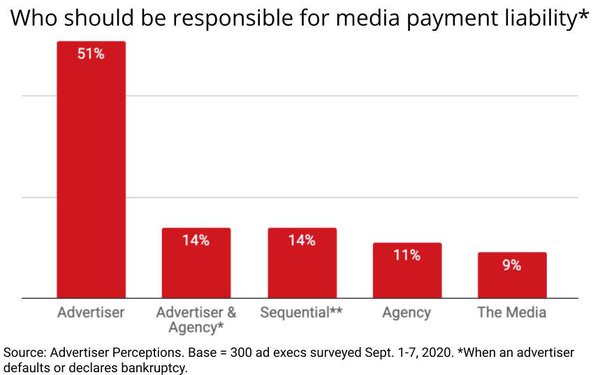 Only 14% of ad executives believe the industry's standard for handling media payment risk -- so-called "sequential liability" -- is the way to handle responsibility for media when a client defaults or declares bankruptcy.

That's the finding of a survey of 300 ad executives fielded by Advertiser Perceptions for MediaPost as client and agency solvency came to a head during the COVID-19 crisis. The study, which was fielded in September 2020, found 51% believe the advertiser should have solve responsibility for paying the media, while 14% said it should be joint and several liability holding both the client and its agency responsible.

A smaller percentage said the agency (11%) should be held accountable, while 9% said media suppliers should eat the loss.

The findings -- which likely reflect an especially anxious time for many industry executives on both the client and agency side as many businesses were struggling to survive -- are surprising, given how hard the Association of National Advertisers (ANA) and the American Association of Advertising Agencies (4As) have fought to make sequential liability -- a clause that makes an agency liable only after their clients have released media-payment funds to the agency -- the industry's standard.

A separate finding in the survey also shows that regardless of the liability standard, most industry executives believe the media holds the agency accountable in any case, treating them as the principal for media buys, not merely as an agent facilitating them. More than three-quarters (77%) of respondents said the media "always" or "occasionally" treat the media-buying agency as the principal with liability for the media buys, while only 1% said that "never" happens.

While it may be unclear how much perceptions of media liability have been altered by the 2020's COVID-19 ad recession, including a number of high profile client defaults and bankruptcies, terms and conditions of media buys have simultaneously been changing due the immense power of big digital media platforms such as Facebook, Google and others, which automatically treat anyone buying media from them -- client or agency -- as the principal. 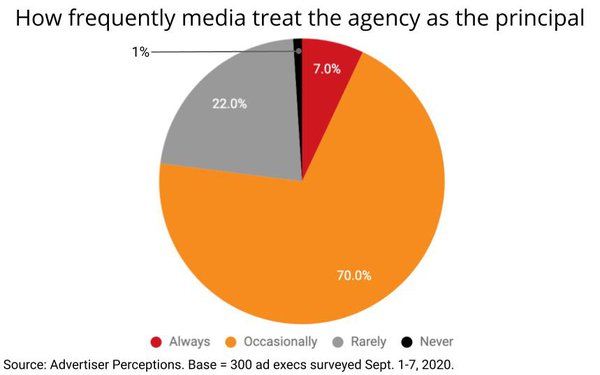