Based On Rate Of Global Billings Expansion, Dentsu X Is Fastest-Growing Media Shop 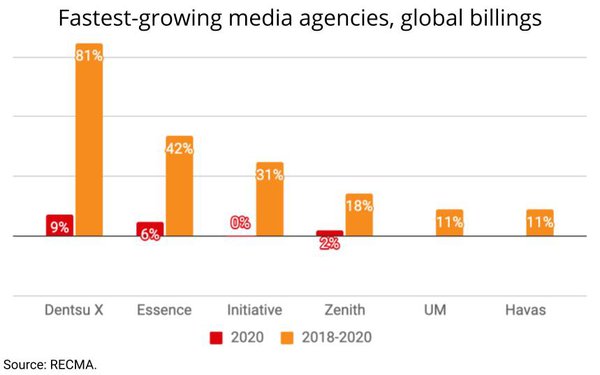 Based on overall global billings growth, Dentsu X is the fastest-growing media agency, according to an analysis conducted by agency advertising account tracker RECMA.

Based on a three-year aggregate growth analysis -- a metric RECMA's analysts say provide a more stable and longer-range view of agency growth -- Dentsu X expanded its global billings base 81%, nearly twice as much as No. 2 Essence's 42% three-year rate of growth.

RECMA analysts said the three-year view is "particularly relevant in 2020 as many agencies record declining growth rate but it is in no way revealing of their performances as they all suffered from the COVID crisis and a stopped of media investment for several months."