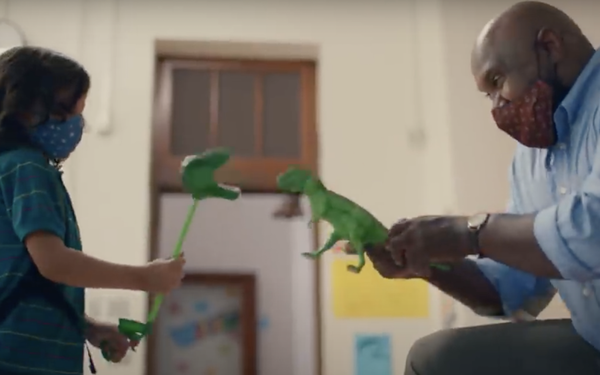 As school masking policies continue to cause controversy across the country (as noted in this WSJ article), Clorox has scored with commercials unabashedly showing masked teachers and youngsters back together again in the classroom.

“Rooted in key parent insights, we set out to capture the joy and optimism of a new school year by celebrating teachers who are helping to create safe and supportive places to learn,” said a Clorox spokesperson. “We made a decision to air the creative produced with masks in accordance with CDC guidance.”

"As parents prepare to send children back to school during the latest spike in COVID cases, it is not surprising to see Clorox’s ad capturing viewers' attention,” said Yan Liu, chief executive officer of TVision  “We know context often influences viewer engagement, and certainly this ad is relevant to the times.”

Old Navy’s spot, featuring four youngsters dancing to an Allister X song with lyrics that won’t endear the brand to grammar-friendly teachers -- “You Ain’t Seen Nothing Like This Before” -- did little to break the retailer’s usual advertising motif.

Clorox, Old Navy, Walmart and Ross all scored above average with their back-to-school ads.

Clorox’s score of 108.9 was also well above the 99.1 score of normal Clorox brand ads, TVision said.