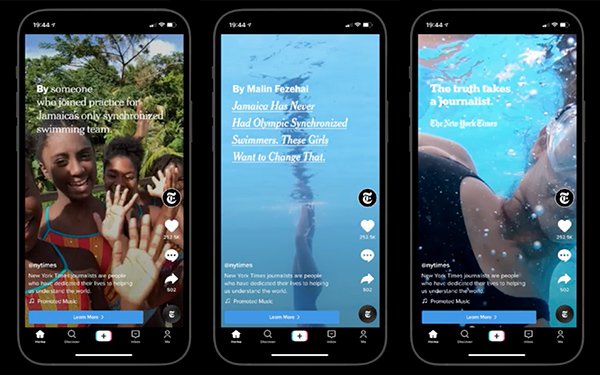 The New York Times’ new brand-marketing campaign, “The Truth Takes a Journalist,” spotlights some of its own 1700+ journalists as they film themselves reporting on stories across the globe. For the first time ever, the Times will advertise on TikTok.

In their latest iteration of the “Truth Is” campaign with global advertising agency Droga5, the Times aims to remind readers who their reporters are, and why the work they’re doing matters.

“This campaign celebrates the journalists who create the stories that help our readers understand the world,” said Amy Weisenbach, senior vice president and head of marketing at The New York Times Company. “The focus on the word ‘By’ personalizes who is behind the bylines readers see in the Times every day. These journalists are real people with passion for what they do, and they play a critical role in the pursuit of truth.”

The campaign itself will be featured on television and streaming sites, digital, online video, audio spots, social media, display, print, digital billboards in New York City’s subway stations -- and most notably, TikTok, where the footage shot on Times' journalists’ phones seems a perfect place to air.

According to the Times, those featured in the campaign are 30 journalists working across various departments and media -- including reporters, video journalists, news and opinion teams, editors, opinion writers, bureau chiefs, photojournalists, graphics directors “and many others.”

Vincent Yang, co-founder and CEO of Firework, a short-form video and live streaming technology platform for retailers, D2C brands and media publishers like the Times, is inspired by this campaign.

According to Yang, it “is not only innovative -- it is a harbinger of publishers and brands will increasingly move to emotionally engage their readers and customers in the imminent next web order.”

Although the Times is leading in digital newspaper subscriptions, with 7.8 million subscribers –– including 6.9 from online news, cooking and games apps –– in first-quarter 2021, the industry has been on a steep decline.

“Short form video formats are becoming the new norm for story, product and brand discovery,” said Yang, “enabling publishers to reclaim their readership and users, and beating the walled garden platforms in the eyeball game.”

Yang believes that The Times has figured out what Amazon has not been able to, that “immersive short video experiences have the power to reconnect us in the digital world.”

“And their choice of platform –– TikTok – is not just aimed at winning the hearts and minds of younger readers,” added Yang, “it is the new emerging format for digital discovery where media is meeting ecommerce too. Brands can take a big lesson learned from the best and brightest in media –– to reclaim their customers and re-engage them in the entire journey toward building vibrant digital communities.”