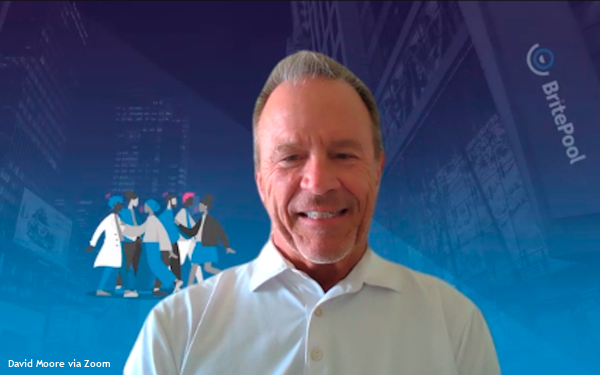 David Moore, a digital advertising pioneer who helped develop the modern ecosystem for targeting people directly based on their digital identities and behaviors, is becoming CEO of a publicly traded company whose mission is to pay consumers directly for the right to use their data, their attention and other ways that brands want to engage with them.

Moore, who has been a partner in BritePool, a startup that has had similar aspirations, this morning announced it is being acquired by BIGtoken, in an all-stock transaction, and will become its CEO.

The merger also reunites Moore with George Stella, a long-time ad tech exec who is co-founder and president of BIGtoken, who will continue as its president following the merger.

Moore and Stella originally worked together at 24/7 Real Media, the pioneering ad-tech company that Moore co-founded, which helped revolutionize digital advertising, and which ultimately was acquired by WPP Group to form the foundation of its media technology and programmatic media-buying divisions, including Xaxis. Moore previously served as president of WPP Digital and chairman of Xaxis before founding BritePool with long-time consumer marketing executive Bob Perkins (Pizza Hut, Chiat/Day, etc.), who will serve as BIGtoken’s COO.

Moore and Perkins founded BritePool in 2019 with a mission of flipping the traditional ad tech model and putting consumers in charge of their own data, including the right to be paid explicitly for use of it, “rewarding consumers to participate in advertising.”

Now, with access to public capital and the backbone of a more established enterprise, Moore says the combined company will accelerate that mission.

“To our knowledge, there is no other public company that has the focus to integrate the consumer directly into the advertising process,” Moore told MediaPost on the eve of this morning’s deal announcement.

Despite its name, Moore says BIGtoken is not a cryptocurrency plan, though there are some visions for how cryptocurrency developers might ultimately play a role in various consumer advertising rewards models. Initially, he says, the company will focus on paying consumers cash in exchange for the right to access their data, attention and actions related to advertising.

Moore says 5 million consumers already have downloaded an app developed by BIGtoken to do that, though he estimates only about a tenth of that currently are “active” daily users.

He said initial engagements for consumer marketers on the platform likely would focus on surveys, polls and other research-focused interactions that pay consumers for their responses, but ultimately envisions a diverse marketplace of pay-for-consumer actions, as well as the development of a “digital wallet” consumers can use to store their earnings and use it to pay for things.

Eventually, he said the wallet could also store non-cash rewards to consumers that have explicit values from a brand “that range from test drives to couponing.”

Importantly, BIGtoken’s platform is 100% privacy-compliant, because consumers opt-in explicitly to every value exchange being offered by brands to engage with them.

While BIGtoken will be the new name of the combined company, its publicly-traded entity has been known as Force Video Protection Equipment Corp., which trades on Nasdaq under the FPVD ticker symbol.

Prior to today’s announcement, FPVD’s shares closed trading on Tuesday at $0.0044 per share and currently has a market cap of $930 million, according to CBS Marketwatch. 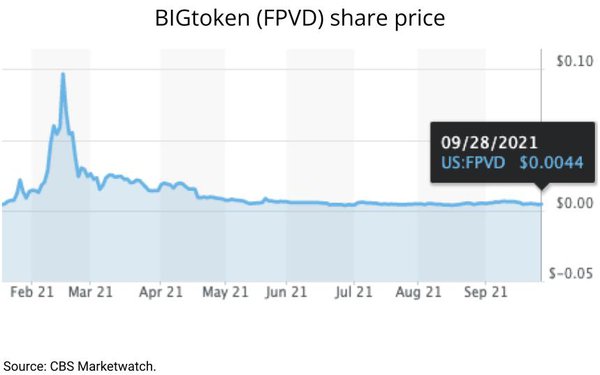