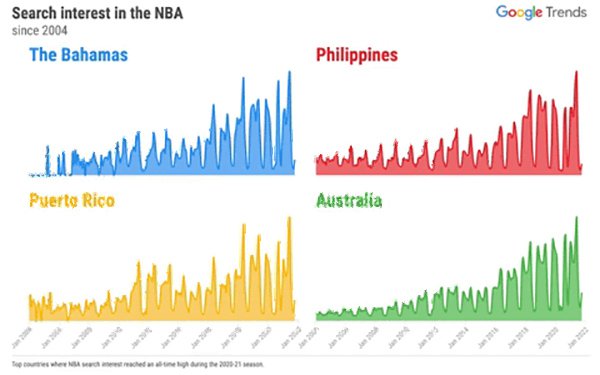 The multiyear NBA marketing and technology partnership means the company will teach the NBA how to use Google Trends, so it can identify real-time search data before, during and after games.

“We'll combine the best of Google’s Search trends, information, technology, devices and services to help fans go deeper and get closer to the culture, teams and players they love,” Lorraine Twohill, CMO at Google, wrote in a post.

The NBA has been the top-searched sports league in the world since 2004, Twohill wrote. People who search for the NBA are more likely to search for social justice compared to any other professional sports league.

Google's YouTube TV streaming service has been the presenting sponsor of the NBA Finals since 2018.

The deal does not include the ability to create licensed products, but Google can use NBA intellectual property on its packaging. Samsung was the last manufacturer with NBA cell handset rights. It signed a three-year sponsorship, with rights to the NBA, WNBA and G League in 2013.