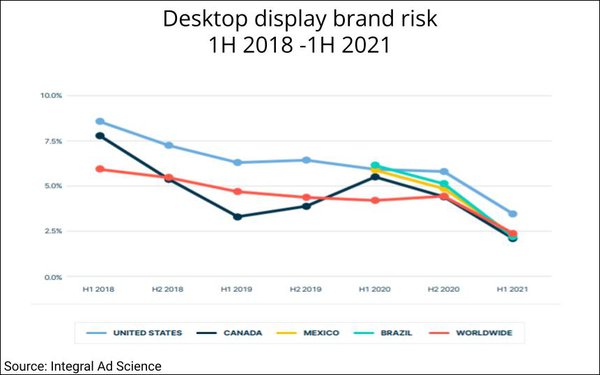 Brand risk dropped across all ad formats and environments globally in this year’s first half, according to a new Media Quality Report from ad verification company Integral Ad Science (IAS).

Display was the safest ad format, averaging brand-risk rates of 2.4% on desktop (down 1.8 points year-over-year) and 2.6% in mobile web globally.

Brand risk for desktop display campaigns dropped by 2.4 points in the U.S., 3.9 points in Brazil, 3.6 points in Mexico, and 3.4 points in Canada.

In the U.S., where advertisers have long faced higher threats of ads appearing next to content featuring violence or offensive language, violent and offensive language accounted for 46% of brand risk in 1H — the first time that figure has dropped to less than half of the total.

Together, violent and offensive language content represented 52.8% of brand risk for desktop display ads when the U.S. benchmark peaked at 8.6% in 1H 2018. After hovering above 50% through 1H 2020, the two categories decreased significantly, with their portion of brand risk for desktop display dropping to 46% and pushing the U.S. benchmark to an all-time low of 3.5% in 1H 2021.

Video ad viewability also increased significantly across all environments and most markets globally.

But the U.S. remained at the bottom of both lists, with viewability levels of 68.2% on desktop and 67.6% in mobile web.

CTV ads remained the most viewable format overall, reaching 93.2%. Benchmarks for all other video environments were below  80%.

Average time-in-view for display campaigns declined across all environments.

For the report, IAS analyzed trillions of global data events from ad campaigns between Jan. 1 and June 30, 2021.