Brave Replaces Google As Default Search Engine In Its Browser 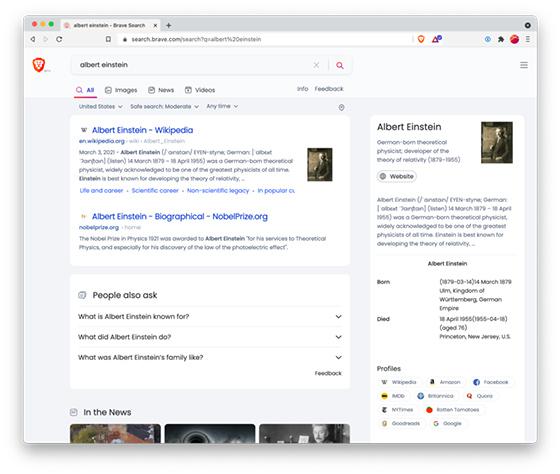 Brave Search has replaced Google as the default search engine for its privacy-focused browser.

The announcement, made Tuesday, means Brave replaces Google in the U.S., the U.K. and in Canada as the default.
It will also succeed DuckDuckGo in Germany, and Qwant in France. Other countries will see the switch in the coming months.

The change in default search engine becomes available across desktop as well as Android and iOS. Users can keep their existing search engine setting or select another competitor.

Brave Search has grown to 80 million queries monthly since June 2021.

The company said Brave Search is built on top of an independent index, and does not track users, searches, or clicks.

Updates are for update version 1.31 as well as the Brave Android app, version 1.31, and the Brave iOS app, version 1.32. All automatically offer Brave Search as the default for new users in these five countries, with fully local versions in non-English geographies.

Brave Search currently does not display ads, but the free version will become ad-supported soon.

Brave Search will also offer an ad-free Premium version in the near future.

The company announced in June that it would build a search engine supported by the acquisition of Tailcat -- an open search engine developed by the team formerly responsible for the privacy search and browser products at Cliqz, a holding of Hubert Burda Media.

WDP represents a shift in how a search index is built to serve relevant results for users. The difference is simple, the company says.

Big tech search engines collect data from users without asking or notifying them to continuously grow their indexes — the list of billions of web pages they draw from to deliver results — and to ensure results are relevant and never stale.

The data can be, and often is, associated with users personally by an identifier or linkable records, according to Brave.

WDP is designed so all data received is "unlinkable," making it impossible to build profiles or sessions of Web Discovery Project contributors. This means there is no data for Brave to sell to advertisers, or lose to theft or hacking, or hand over to government agencies, allowing the company to keep promises through technology rather than slogans.

The system contributes anonymous search and browsing data made in the Brave browser from users who opt in. This data helps build the Brave Search independent index, and ensures that Brave Search shows results that are relevant to search queries.

A large number of people need to visit a specific URL for the technology recognize it automatically, and it is done through a specific protocol.

The method discards search queries that are too long or suspicious looking. It also discards odd URLs, such as capability URLs), URLs of pages that the creator defined as non-indexable, and of course pages that are not public or that require any sort of authentication.

WDP runs automatically while a user is browsing the web, so it requires no effort on the part of contributors.