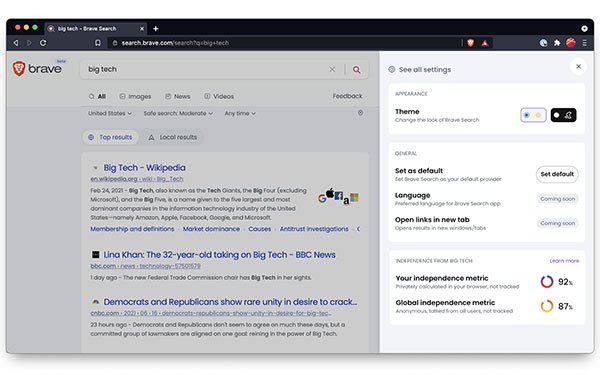 Brave becomes a formidable competitor Tuesday to Google Search, Microsoft Bing and others with the release of its Search engine in beta today on all Brave browsers — across desktop, Android, and iOS. The search engine also will become the default feature in its browser later this year.

The engine runs off its own index that follows privacy principles without the reliance of other search engines or providers, so it does not track or profile users. There are no secret methods or algorithms that would bias results, and forthcoming features were outlined in the announcement.

The search engine will run off community-curated open-ranking models to ensure diversity and prevent algorithmic biases and censorship.

Brendan Eich, CEO and co-founder of Brave, believes that a community-powered index will become the future for search.

Eich, the creator of JavaScript and former CEO of Mozilla, and Brian Bondy, CTO for the company, founded Brave Software on May 28, 2015.

In a recent paper published by the Brave search team titled Goggles: Democracy dies in darkness, and so does the Web, the authors describe an “open and collaborative system by which a community, or a single user, can create sets of rules and filters, called Goggles, to define the space which a search engine can pull results from.”

Rather than one ranking algorithm, the engine would have as many as needed to overcome the biases that the search engine embeds in results. Transparency and openness would become accessible through the deep-re-ranking capabilities that Goggles would enable.

The company also said the engine will provide the option of ad-free paid search or ad-supported search. It also will have the ability to power other search engines.

Brave announced in March that it would build a search engine, along with the acquisition of Tailcat. an open search engine developed by the team formerly responsible for the privacy search and browser products at Cliqz, a holding of Hubert Burda Media. Tailcat became the foundation of Brave Search.

Since then it has been tested by more than 100,000 users with early access to the engine. Brave recently passed 32 million monthly active users -- up from 25 million in March.

Brave Search is the latest product offered by the company in its suite of privacy tools as millions of users turn to alternatives to Google, Bing and others. Some of the features include Brave Ads, Brave News, and a Firewall+VPN service.

Brave Search also said on Tuesday that it would offer an “independence metric” that displays the ratio of query results that comes from Brave versus other engines. In other words, it allows users to verify the independence of their results to see where Brave gathered the information, either through the Brave index, or a third-party like Microsoft Bing.

For example, Brave Search will typically answer most queries, reflected by a high independence metric.

For some features, however, such as searching for images, Brave Search will get results from Microsoft Bing. While this will not result in any tracking of the users, it will reduce the independence metric.