Google Found To Have Highest Number Of Fake Reviews 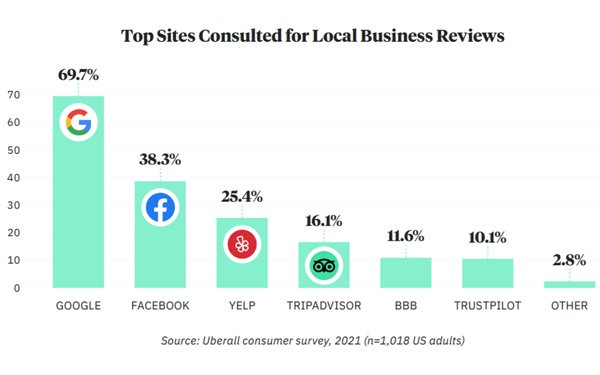 Positive reviews help businesses rank better in search results and lead to more conversions. About 90% of consumer consult online reviews before making a purchase, but data released Thursday shows 67% of consumers are concerned about review fraud and most cannot spot inauthentic reviews.

“Fake reviews are like a cancer in the review corpus,” wrote Greg Sterling, vice president of market insights at Uberall, in the report titled The State of Online Review Fraud.

To create the report, the two analyzed 4 million store reviews on Google, Facebook, Yelp, and TripAdvisor using AI and natural-language processing to identify un-authored reviews across 19 local business categories. The data was fielded between Q4 2020 and Q2 2021. This is what they found.

TripAdvisor on Wednesday released data that estimates the travel site found and removed about 1 million fraudulent reviews in 2020.

Curtis Boyd, founder and CEO of the Transparency Company, called it a “multibillion dollar problem.”

CHEQ and the University of Baltimore recently produced an economic analysis of the impact of fake reviews on consumer buying.

Using self-reported data from review sites, the study found that in the aggregate, 4% of online reviews were fake. It then estimated that the direct influence of fake reviews on online spending is estimated to cost $152 billion globally in 2021.

Review fraud is illegal. Fake reviews qualify as “unfair or deceptive acts or practices in or affecting commerce” under Section 5(a) of the U.S. Federal Trade Commission Act.

Some 66% of consumers say fake reviews are a “growing problem” or a “major problem.” The most common fraud type that surfaced in the study was “fake profiles with fake reviews,” generated or paid for by the business itself.

The data identified Locksmiths with 14.5% of fake reviews as the highest category, followed by moving companies at 13.7%, plumbers at 12.3%, digital marketing agencies at 11.4%, and personal injury lawyers at 10.6%. Pharmacies has the lowest at 1.3%.

The urban area with the highest review fraud percentage is the Miami-Ft Lauderdale area, with 9.7%, followed by Tampa at 9%, Los Angeles at 8.8%, Phoenix at 8.1%, and Chicago at 7.9%. Boston was the city with the lowest fraud percentage, at 3.9% of all reviews.

Reviews impact search rankings, according to Sterling. More reviews and positive ratings can improve the local ranking of a business. Reviews also dominate the top Google local “conversion factors,” according to leading local SEO practitioners who participated in the study.

Individuals try to post fake reviews, and there is an entire cottage industry that produces and sells five-star fake reviews in bulk.

The industry needs consistent enforcement through use of AI tools to slow the spread of review fraud. The industry must move toward verification systems that minimize the likelihood that other than the actual customer is writing reviews such as verified purchasers.