A small orange insert offering a $35 gift card from RAVPower with instructions on how to redeem it sparked additional challenges for Amazon and its marketplace.

The gift card incentive came along with a RAVPower-branded two-port fast charger with five-star ratings -- with about 9,800 ratings in all. Amazon was the seller.

Donny Dong, vice president of sales at Sunvalley, the parent of RAVPower, told The Wall Street Journal the company didn’t “force customers to leave five stars in order to claim a gift card.”

An Amazon spokesman told the WSJ that the insert violates the company’s policy, which bans sellers from offering a financial reward for reviews.

The Amazon spokesman said the company analyzes 10 million reviews a month, using a combination of human moderators and machine-learning tools to stop abuse.

In this case, RAVPower asked those purchasing the product to either “Email us A. Your order ID (screenshot) B. Your review URL (or screenshot).”

Amazon which makes up 49% of all U.S. ecommerce, states that less than 1% of reviews are fake, according to an economic study by CHEQ and the University of Baltimore. The study also points to Yelp, which claimed that as of December 31, 2020, approximately 8% of the reviews submitted to its platform had been removed.

In 2021, TrustPilot published its first transparency report revealing that 5.7% of reviews -- 2.2million -- were removed. Google's analysis of fake postings and reviews on Google Maps, which found that fewer than 0.5% of local searches were "policy-violating reviews" or "fake business profiles."

In the United States — of the $791 billion generated in ecommerce revenue, $28 billion of consumer spend is influenced by fake reviews.

Travel is influenced the most. Fake online reviews, per the study, also will directly influence $21.2 billion of online travel bookings in 2021, and directly impact $4.1 billion of US travel spend. Electronics, furniture and homeware, fashion, and entertainment follow.

Most people are influenced by reviews. Multiple studies reveal that at least 89% of consumers globally check reviews online before making purchases -- up from around 82% eight years ago. From this data, CHEQ concluded that online reviews influence $3.8 trillion of global ecommerce spend in 2021.

CHEQ defines fake online reviews as any positive, neutral, or negative review that is not an actual consumer's honest and impartial opinion and does not reflect a genuine experience of a product, service, or business.

The sites on which reviews appear range from online brands making online feedback part of their core offering, such as Amazon, and sites that embed third-party review platforms such as Expedia, to platforms whose core purpose is to provide reviews and feedback such as TripAdvisor.

It’s clear that fake reviews bring immediate benefits. An extra star rating can increase revenue. The Federal Trade Commission in 2011 showed that fake reviews can provide a 20-times payoff. It also can prompt a “substantial short-term rocket in organic search positions and sales” that lasts for about four weeks, according to the report.

Trading of fake online reviews has become standard practice with groups, commission structures, and loyalty schemes. Payments change hands from around 25 cents to $100 per review.

Marketplaces including Facebook private groups increasingly solicit buyers to purchase their product and leave a five-star review in exchange for a full refund -- and in some cases, a $5 to $10 commission as well. 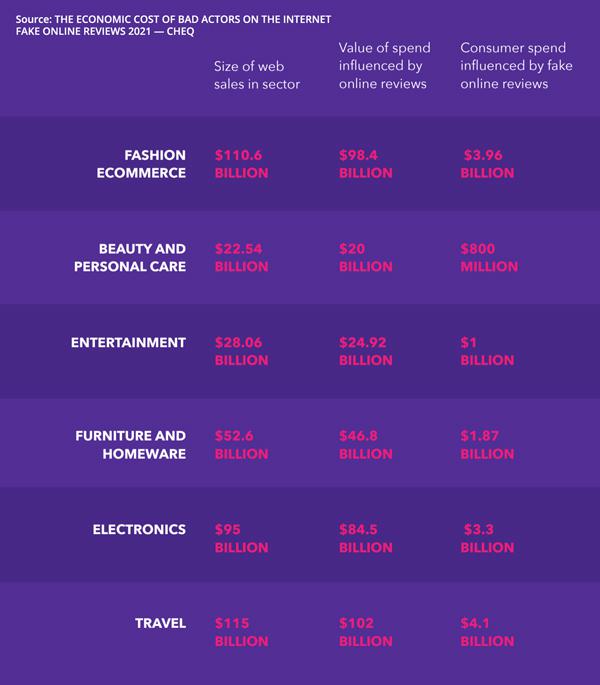