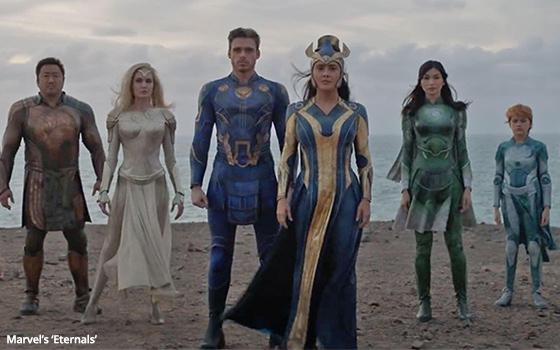 Disney/Marvel Studio's “Eternals” didn’t break any opening weekend record for Marvel franchise movie, but it still posted what amounted to a top-five theatrical opening weekend for 2021 -- a year still feeling the effects of pandemic-related disruption.

For its entire national TV advertising campaign -- which ramped up in earnest beginning on October 3 -- $17.3 million was spent, according to iSpot.tv.

The bulk of the advertising -- in terms of resulting impressions -- was with NFL Football (141.7 million) and Major League Baseball (72.4 million)

The best debut after “Eternals” was Neon’s “Spencer" at $2.1 million.

This is up 75% versus the same period in 2020 ($335.3 million), which was also impacted by pandemic-related theater closures.

At the same time, this total is down 49% from the pre-pandemic 2019 period, where national TV spend was $1.15 billion, season-to-date.