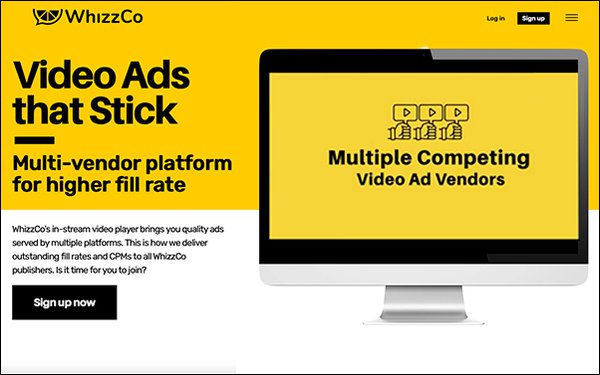 Content recommendation (CR) tends to go against the digital ad trend of real-time and open programmatic auctions with exclusive contracts and no real-time bidding, according to a WhizzCo company spokesperson, but opening the instream CR video market by enabling bidding and serving video ads from multiple and competing vendors will change processes.

Some 83% of video marketers say video has helped to increase the average time site visitors spend on a web page, while 84% of people surveyed report being convinced to buy a product or service after watching a brand’s video, according to Wyzowl, an animation studio.

Publishers working with WhizzCo can choose to work, or not, with multiple participating video ad vendors.

WhizzCo’s proprietary predictive AI algorithm selects the ad to serve based on geolocation, device, site, widget layout and location, and historical performance. By working with multiple vendors with a larger collective pool of ads, WhizzCo can generate a higher fill rate.

Company data suggests publishers can boost their CPMs by between 27% and 43% from video ads with revenue based on views and not clicks, sourced from multiple vendors.

Measurement is impression-based rather than click-based. The ad unit displays in the corner until the user scrolls down to its instream placement. This increases video views, improves the user experience, and generates greater CPMs, further increasing publishers’ revenue.