Hyundai To Appear In 'Spider-Man: No Way Home' 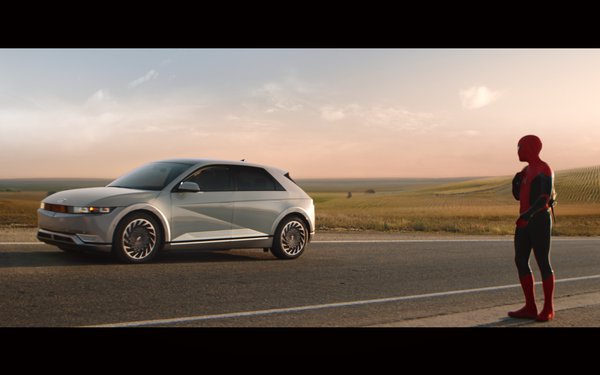 “Spider-Man: No Way Home,” which opens in movie theaters Dec. 17, will include the Hyundai Ioniq 5 all-electric vehicle and Tucson SUV.

Hyundai Motor Co. inked a multi-film strategic partnership with Sony Pictures in May 2020, but this is the first “meaningful milestone” in the relationship, says Thomas Schemera, executive vice president, global chief marketing officer and head of customer experience division of Hyundai Motor Co.

In addition to the product-placement scheme, Hyundai Motor is using its intellectual property rights associated with the movie in the long-form commercial, “Only Way Home,” which is directed by Jon Watts, the director of all three of the most recent Spider-Man films.

The spot, features Holland hitching a 300-mile ride to New York with his best friend Ned Leeds (Jacob Batalon) in the the Ioniq 5, which just happens to have 300 miles of range.  A 30-second broadcast version will air as part of high-visibility television programs in the U.S., Europe, China, Russia and other global markets through January 2022.  Another 30-second spot featuring the Tucson compact SUV shows key scenes from the film.

All spots were created by Hyundai AOR Innocean USA.

On social media, Hyundai will offer fans a way to obtain a “Hyundai Ioniq 5 x Spider-Man: No Way Home” special edition poster as well as customized digital wallpapers. A behind-the-scenes video of the commercial and other unique contents will also be available online.

The effort includes video boards at Piccadilly Circus in London, as well as via various advertising outlets around the world.

Next up are marketing initiatives related to the upcoming films “Uncharted,” due to premiere in February 2022, and the sequel to the critically acclaimed, Academy Award-winning animated film, “Spider-Man: Into the Spider-Verse,” due to premiere in October 2022, Zepeda says.

Movie-related deals have been popular for automakers this year.

Land Rover recently inked a deal with the James Bond film, “No Time To Die” and Toyota and Marvel produced three episodes of "Marvel Live! Presented by Sienna.” BMW also partnered with Marvel for the first time.