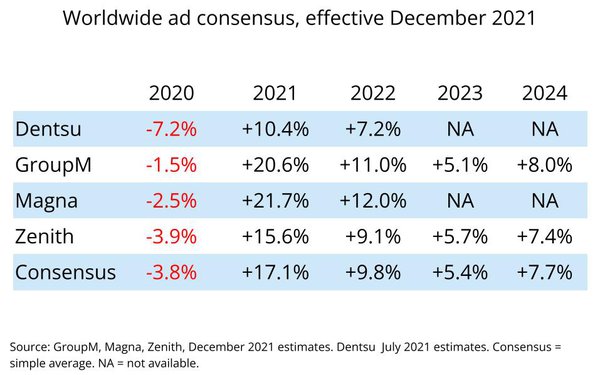 The U.S. and worldwide ad economies are now projected to expand at their fastest rate ever, according to a consensus, as well as individual estimates released this morning by three of Madison Avenue's leading forecasting units.

Moreover, the projected record ad expansion in 2021 comes on a more moderate consensus estimate for 2020's U.S. and global ad recessions, which now stand at -2.0% and -3.8%, respectively.

"This year over 2019 is well above historical norms," GroupM Business Intelligence Global President Brian Wieser said during an advance briefing with members of the press Friday, adding: "We’re creating a new plateau for future growth to occur."

GroupM, however, was not the most aggressive upward revision. Magna revised its 2021 growth estimate for worldwide ad spending up 8.2 percentage points to 21.7% from the 13.5% rate it was projecting in its June forecast.

Magna Executive Vice President-Global Market Intelligence Vincent Letang described the combined economic effects driving the record growth as a "once in a lifetime planetary realignment," during an official ad forecast panel discussion this morning, as part of UBS' annual "Media Week" conference. UBS analysts noted it was the 50th anniversary of the ad outlook panel.

“This is a ridiculously strong ad market,” GroupM’s Wieser added after Letang’s presentation, concurring with his “planetary realignment” characterization.

“I think this is possibly the fastest growing year ever in terms of the ad industry, and that is well worth noting,” he said, adding that he trolled through reams of historical data, including legendary Interpublic forecaster Bob Coen’s archives going back through the 1970s, and could not find a better growth rate. 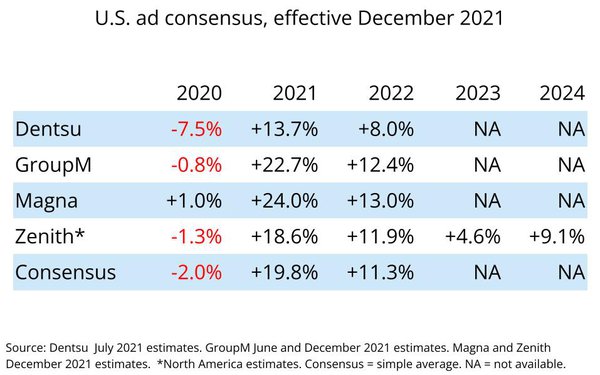