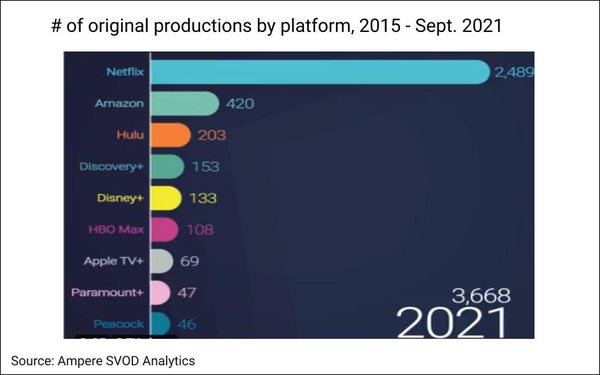 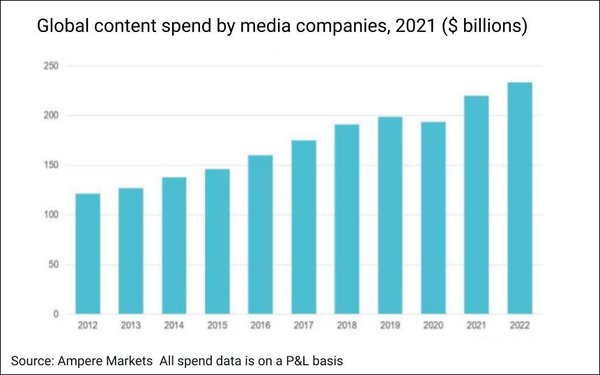 SVODs' spending represented growth of more than 50% compared to SVODs’ 2019 spending, and more than compensated for still-lower-than-2019 content spending by commercial and public service broadcasters.

Together, Apple TV+, Disney+, HBO Max, Peacock and Paramount+ spent more than $8 billion on content in 2021.

But Netflix — which produced a whopping 2,489 original titles between 2015 and this September, compared to 420 for runner-up Amazon Prime Video (chart at top of page) — continued to dominate in content spending.

Netflix invested $13.2 billion and accounted for 30% of total SVOD content spending and 6% of total global content investment for the year.

In addition, Netflix was the fourth-largest investor in overall professional video content ($14 billion). The top spenders were Comcast and its subsidiaries ($22.7 billion) and Disney ($18.6 billion), whose totals include spending on both linear TV and theatrical films, and Google ($15 billion). 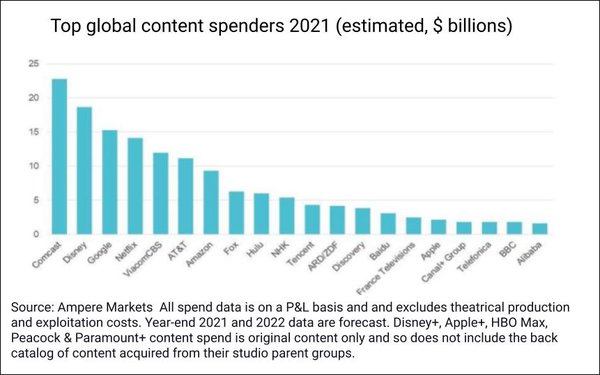 “Comcast and Disney invest heavily in sports rights, which — alongside their hefty investments in original content — contributed to their leading positions,” stated Hannah Walsh, research manager at Ampere Analysis. “Sports rights made up over a third of both Comcast and Disney’s spend in 2021.”

Content spending by commercial and public service broadcasters rose in 2021 but remained below 2019 levels, in part due to the shift to online video, according to the report.

In 2022, the researcher is projecting that total global content investment will exceed $230 billion — again primarily driven by subscription streaming services, as the original content battle intensifies both in the U.S. and in the global markets that are increasingly key to their growth.