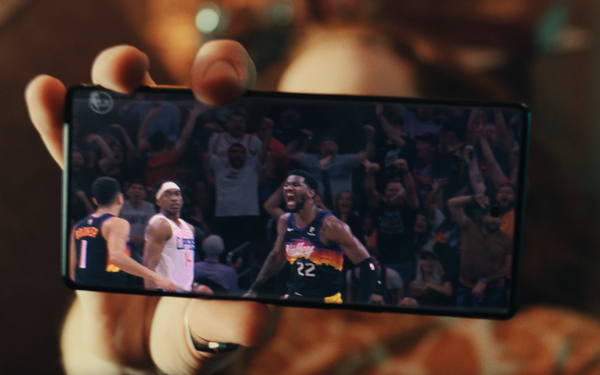 The 60-second spot created by agency Wieden+Kennedy in New York began running during the game across TV, digital and social.

It features the new Google Pixel x NBA-themed creative with the Milwaukee Bucks superstar Giannis Antetokounmpo being named the new face of the phone.

The spot demonstrates all the ways the phone’s features help fans express their obsessive NBA fandom.

For example, the television commercial starts by calling out the Bucks fans, the Suns fans, and those in Serbia who became Nuggets fans, demonstrating the translation feature in the phone, from Serbian to English.

Magic Johnson also appears in the spot. Demonstrating the “eraser” feature, the ad shows three female Miami Heat fans standing together with a fan of another team posing in the background. The Magic Eraser feature in the Pixel erased the photo-bomber from the photograph.

All types of NBA fans are celebrated in this commercial, from Portland fans to Clipper fans.

"There are so many ways to love the NBA," the narrator says. "And the Pixel 6 is built for all of them."