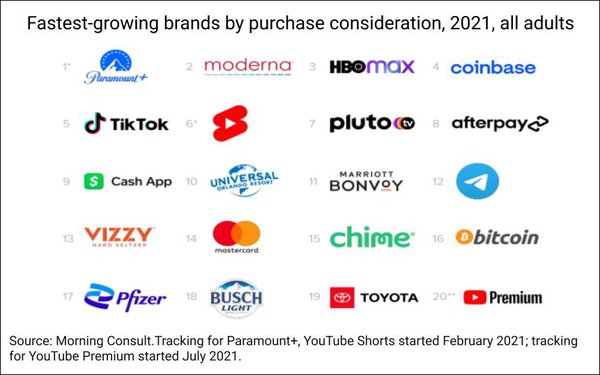 Two new streaming services — Paramount+ and HBO Max — were the only major brands, across product categories, to see large gains in purchasing consideration during 2021, according to Morning Consult Fastest Growing Brands analysis for the year.

Social video app TikTok was also a standout in a year in which purchase-consideration growth levels were notably low, in large part due to the COVID pandemic’s impacts, according to the report.

Morning Consult conducts daily tracking of consumer perceptions across more than 4,000 brands. For the top-20 growth rankings, 1,159 brands were analyzed.

Paramount+ (relaunched from CBS All Access in March 2021) and HBO Max (launched in May 2020) emerged as the No. 1 and No. 3 fastest-growing brands among all adults (chart above).

Among Gen Zs, the two brands (actually, Paramount+ and HBOFilms) held the first and third positions.

Among Millennials, the respective rankings of Paramount+ and HBO Max were No. 1 and No. 20; and among Gen Xers, No. 2 and No. 7.

Baby Boomers were more partial to HBO Max, which ranked No. 3, to Paramount+’s No. 6. 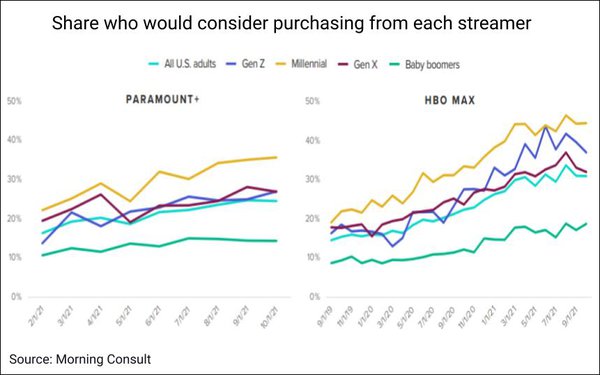 The analysts note that during times of high stress — such as this year’s continuing COVID-19 pandemic — consumers tend to turn to more established brands or products they already use. That translates to muted growth among new brands, which tend to dominate the growth rankings in more typical years.

That means the brands that did make it into this year’s top 20  “have truly captivated consumers,” notes the report.

Further, with more than 200 streaming services available, it takes a lot to make waves in the increasingly crowded streaming ecosystem.

Unlike streamers that rely more heavily on one or two hit series to boost buzz, Paramount+ “aced” its rebranding with a combination of films, TV shows, live sports and news that brought in new consumers, say the analysts.

The rebranded iteration saw its largest purchase consideration growth among Millennials: up more than 14 points versus 2020’s performance for CBS All Access.

In comparison, the more established streamers, including Netflix and Hulu, saw their purchase consideration growth level off across the course of the year. 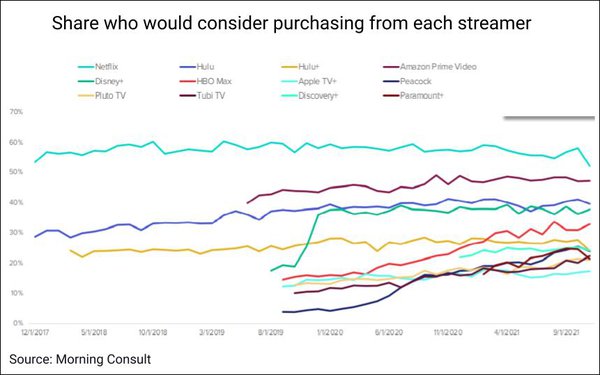 Turning to social media, TikTok saw strong growth among all adults (17% to 21%), although the data also indicate that the platform could be heading in the direction of social media platforms before it: As they become more popular among older generations, they lose their appeal to younger consumers. 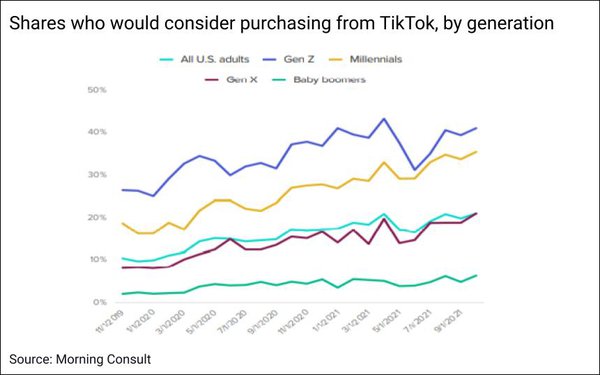 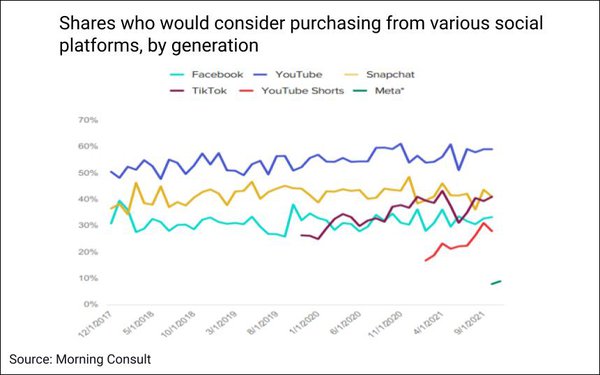 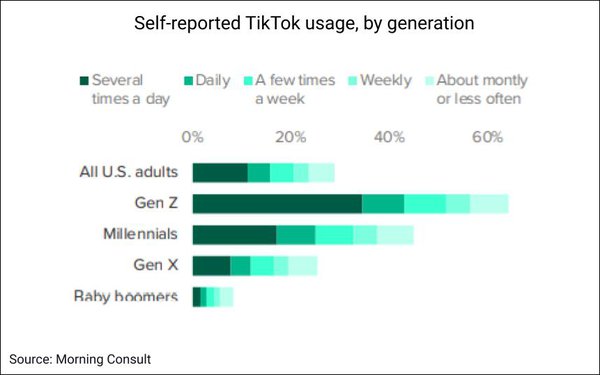 As shown in the “all adults” top-20 ranking (top of page), 2021 was also a banner year for brands in the cryptocurrency, fintech and digital payments sectors.