Instagram Follows TikTok Trends, How This Could Impact Its Future 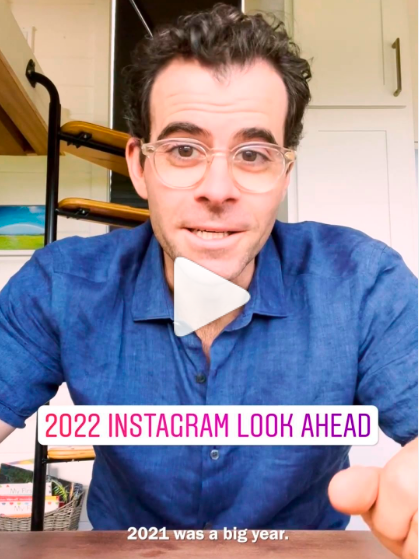 The intense competition among popular social media apps has led to a blending effect -- whatever element seems to be captivating users most is then poached by other platforms, only to be adopted into their overall vision.

This growing trend may be most obvious in Instagram's incorporation of key elements of the increasingly popular app TikTok. One just has to look at their adoption of a vertical feed, Reels, an online shopping component, stickers and text-to-speech effects, among other features.

In a recent video, Adam Mosseri, head of Instagram, says this trend will only ramp up in 2022. In terms of the app’s focus on areas of growth for the new year, consolidating video to maximize engagement will take the cake.

Specifically, the focus is on short-video format Reels, Instagram's most visually similar feature to what continues to make TikTok the most downloaded app globally on Christmas Day.

The platform’s focus on Reels is not a mystery to regular users, as the automatic vertical video clips were integrated into the main Instagram feed back in October.

It's important to consider the direction that Instagram is headed.

Will full-screen short-form videos fully take over the current stream of static posts? Or will the company still value its original photo-sharing vision in at least some capacity?

Within the next year, how much more consolidating can Instagram do without looking identical to TikTok?

Aside from short-form video, Mosseri also mentioned the importance of three other aspects of the Instagram experience. First was in-app messaging, as he called it “the primary way that people connect online.” Second was transparency, giving users more control over their actions when posting and scrolling. Third was the continued focus on creators, a trend that is seemingly crucial for any social app's survival.

While Instagram is still a massively popular platform, its further moves toward TikTok are debatable in terms of its ability to stand out in the future. However, this begs the question of whether an app stands out, or whether its ability to do the same thing best will determine success.

Another idea being cast around is Instagram’s attachment to the rise of Meta’s potential virtual (VR) and augmented (AR) reality frontier. While Snapchat has been in the forefront of in-app AR experiences, Meta's Oculus app was recently the most downloaded app on Christmas Day in the United States.

Teaming up with the future of AR/VR technology could be what eventually pushes Instagram past TikTok. It's too early to tell.