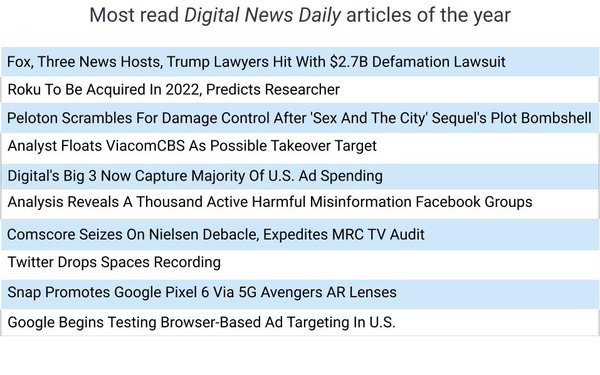 In 2021 — a year that started with the violent attempted overthrow of U.S. democracy on January 6 — the most-read Digital News Daily article, published four weeks later, focused on the actions of a high-profile media outlet rather than directly on advertising.

In a year that saw accelerated industry consolidation, it’s probably not surprising that speculation about which major players might be among the next to be sold off (such as ViacomCBS and Roku) would be among the best-read.

And in any year, it wouldn’t be surprising that a shocking and potentially brand-crippling PR crisis — the infamous “And Just Like That” plot twist featuring the death of “Mr. Big” after exercising on a Peloton machine — was catnip for readers. (As were follow-ups on how Peloton managed to expertly diffuse the crisis.)

While auditing news is (for some reason) rarely compelling to the general public, advertising types were naturally attracted to the news of Comscore’s move to expedite its own Media Rating Council television audits amid arch-rival Nielsen’s ratings undercounting and MRC accreditation woes.

With devastating exposes of Facebook’s damaging effects on society and regulatory actions targeting social media in national headlines throughout the year, the advertising industry’s love-hate relationship with these platforms became more obvious —and more problematic — than ever.

That polarized relationship was starkly demonstrated by the two most-read social media news stories of the year: One confirming that Facebook, along with Google and Amazon, attracted the majority of all U.S. ad spend last year, and the other about a watchdog group documenting more than 1,000 active election and COVID misinformation sites on Facebook.

(In case you were wondering whether this potentially explosive marketing quandary would diffuse in 2022, see today's news on more than 800 big brands having been found to be still funding websites that spreading lies and conspiracy theories about the 2020 election and the January 6 riot.)

And with the eventual demise of cookies-based tracking on the minds of all marketers, Google’s U.S. testing of its controversial browser-based ad targeting was a must-read.