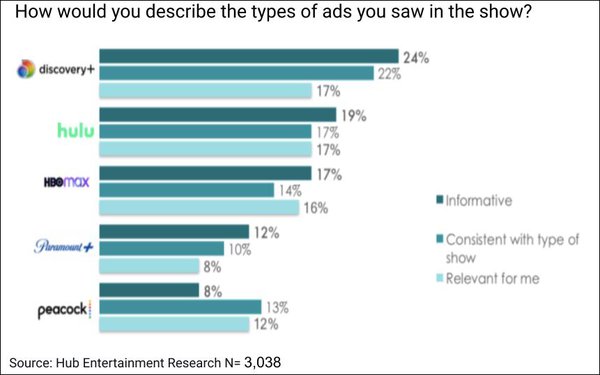 A new study indicates that relevance trumps even high ad loads when it comes to how consumers view their experiences of watching shows on streaming TV — and finds Discovery+ to be a prime example of this dynamic.

For the second wave of its “TV Advertising: Fact vs. Fiction” study, completed in December, Hub Entertainment Research asked 3,038 U.S. TV viewers (minimum one hour per week) ages 14 to 74 (U.S. Census balanced) about a recent experience watching a show on an ad-supported platform.

On the flip side, however, among those who reported that the show’s ads featured products that matched their interests (regardless of the number of ads estimates), 58% rated their viewing experience as positive.

Exemplifying this, when asked to compare ad loads and experiences with shows watched on various streamers, 50% said they saw more ads on Discovery+ than the other services (the highest of any service included in the survey), yet 60% described the number of ads on Discovery+ as “reasonable.”

In comparison, just 33% said they saw more ads on Paramount+ (the smallest percentage among the services included), but the number viewing that platform’s ads as “reasonable” was slightly lower than for Discovery (59%). 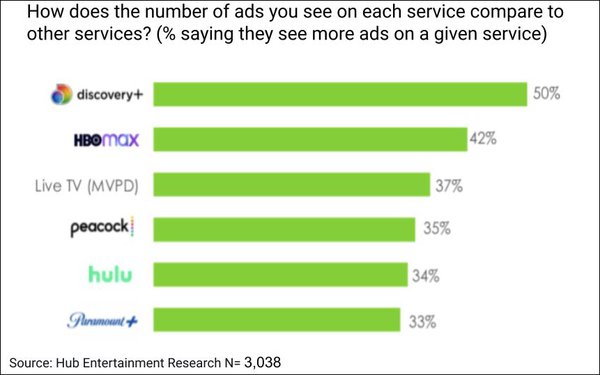 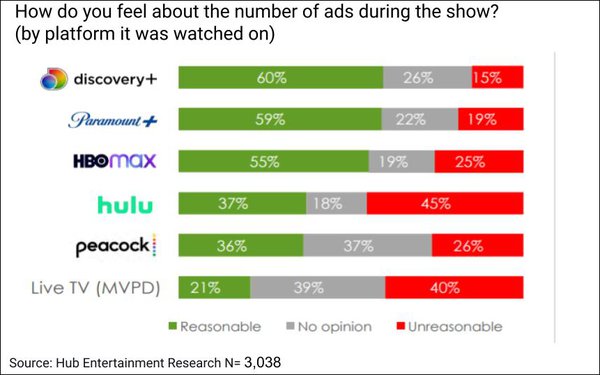 Why the seemingly greater tolerance for Discovery+ ad loads?

More respondents found Discovery+’s ads to be “informative,” “consistent with the type of show” and “relevant for me” than those of Paramount+ and most of the other services included. (See chart top of page.)

Overall, most respondents also seemed tolerant of targeting: 55% of those who said the ads on a given service seemed to reflect products that they have purchased or searched for rated their overall experiences positively.

Asked specifically how they feel about ads targeted to them based on shared information about them, 56% of total respondents said they were neutral (no strong negative or positive feelings).

Just 16% expressed a negative reaction — down six points from the results for the same question asked by Hub in the first wave, conducted in June 2021. And 28% actually reported a positive reaction to targeted ads — up five points versus the June survey.

Most expressed comfort with targeting based on the types of shows they watch (61%), the products they have purchased (51%) and the products for which they have searched (50%).

However, fewer than half expressed willingness to let advertisers target them based on information about the websites they visit or what they post on social media.

Ad-supported TV providers have been focused on trying to delivery reach and frequency for advertisers without overloading viewers with ads, notes Peter Fondulas, Hub principal and co-author of the study. “So far, the primary focus has been on finding the ad load sweet spot that both groups find reasonable. But this research — in particular, the findings for Discovery+ — suggests that the key to overcoming ad load concerns is delivering spots that viewers clearly recognize as in line with their interests. The vast majority of viewers are not opposed to sharing the kind of data that will allow that to happen.”

The latest survey also found that ads are not necessarily associated with higher self-reported churn, even on paid platforms.
While the assumption might be that churn would be higher on service tiers that have ads, as well as require payment (albeit lower than on their no-ads tiers), this varies by brand, with some ad-supported tiers showing lower intended churn rates: 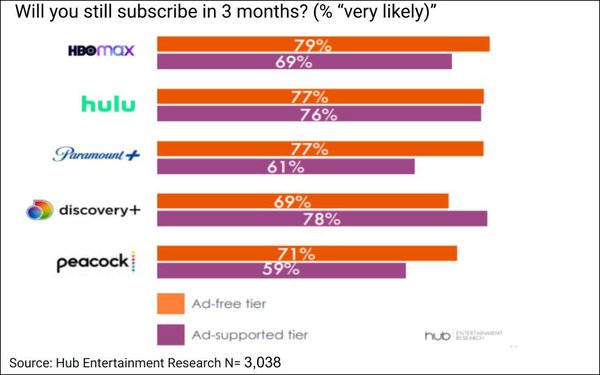 This second wave also found even more U.S. TV viewers saying that they use ad-supported video-on-demand services: 47%, up from 35% in last June’s survey. One reason for the bump, however, is that HBO Max had not yet launched, and so wasn’t included in the first wave. 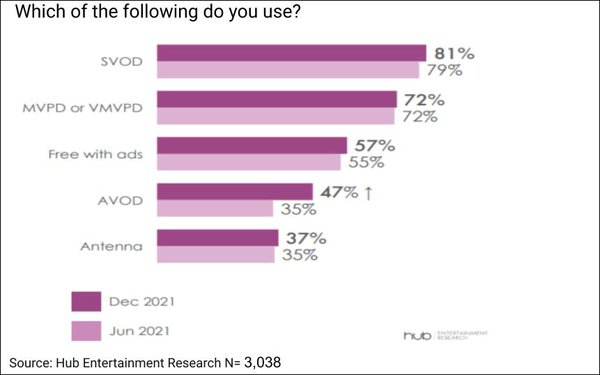 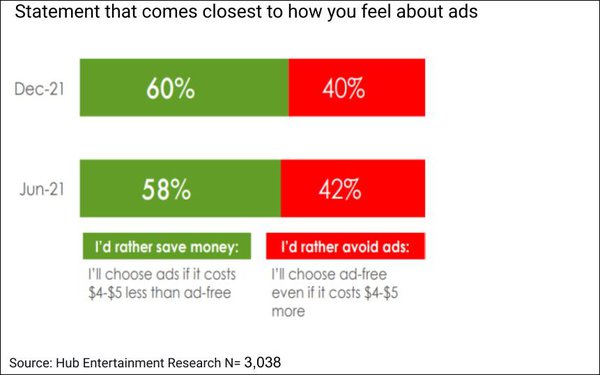