FTC: Consumers Should Opt Out Of Ad Targeting To Avoid Social Scams 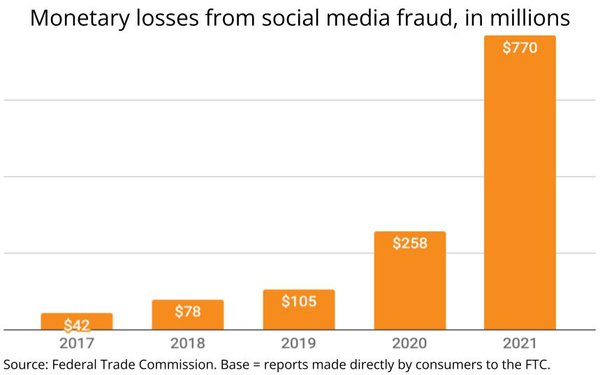 The Federal Trade Commission, which is gearing up to pass privacy rules, suggested this week that consumers opt out of targeted advertising on social media in order to avoid fraudsters.

“Scammers could easily use the tools available to advertisers on social media platforms to systematically target people with bogus ads based on personal details such as their age, interests, or past purchases,” the FTC says in a new report exploring scams on social media.

The FTC wrote that consumers lost approximately $770 million last year due to fraud originating on social media, including schemes related to investment, romance and online shopping.

Consumers who reported being bilked often said they placed an order but didn't receive merchandise.

The report also listed steps that consumers can take steps to avoid getting swindled -- including limiting who can see their social media posts, investigating companies before sending money, and reading about romance scams.

Included in those recommendations was the following suggestion: “Check if you can opt out of targeted advertising. Some platforms let you do that.”

“More than 1 in 4 people who reported losing money to fraud last year said it started on social media, where scammers can often target people with precision,” she tweeted Thursday.

The agency hasn't yet started the lengthy process of crafting privacy rules. But FTC's attempt to tie monetary loss to ad targeting suggests that officials are trying to build a case that online behavioral advertising causes sufficient economic harm to warrant regulation.

If so, the development marks a significant shift from just four years ago, when the FTC not only opposed the idea that companies should be required to obtain consumers' explicit consent for behavioral advertising, but touted the potential benefits of data collection, such as “more relevant online experiences” and “customized offers.”