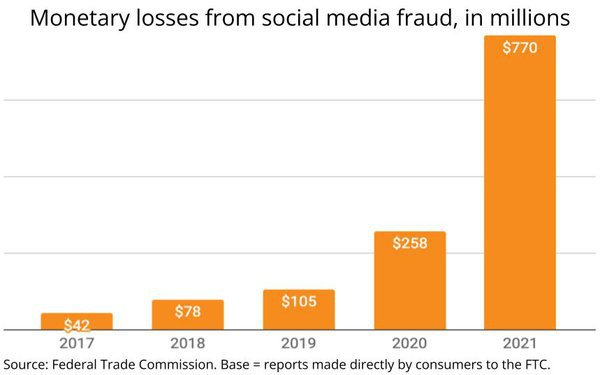 Emerging cryptocurrency and ecommerce technologies have created a plethora of new kinds of scams, according to the report.

The FTC also found that those being targeted were also younger, with consumers between the ages of 18 and 39 reporting fraud at 2.4 times higher rate than those above the age of 40.

Social media is the clear gateway for scammers to reach this younger audience. The report shows that social media is where 95,000 fraud victims were first contacted.

Facebook and Instagram were listed as the two top social media platforms where undelivered products were marketed, appearing in 9 out of 10 reported scams.

User doubt surrounding the legitimacy of in-app online shopping opportunities could have a significant negative impact on the future of ecommerce.

Facebook and Instagram were also most popular among scammers who sent “innocent” friend requests to users, flirted with them romantically, and then requested money. Twenty-three percent of romance scams were linked to Facebook, and 13% to Instagram.

Fifty-four percent of investment scams also involved social media platforms, where users were faced with fake investment opportunities. Thirty-six percent of these scams took place on Instagram, 28% on Facebook, 9% on WhatsApp (another Meta-owned company) and 7% on Telegram.

Scams could become more prevalent due to other Meta-created products, such as their virtual reality (VR) headsets, having just changed names from “Oculus Quest” to “Meta Quest.” Used primarily by Gen Z and Millennials, these VR technologies may continue the trend of scamming younger, more vulnerable users.