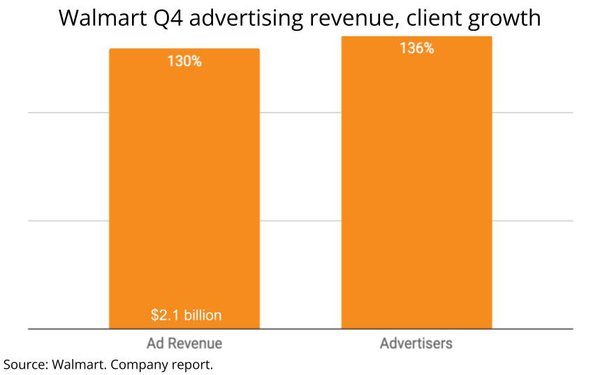 Walmart sits on a growing list of retailers that have launched advertising businesses, such as Target and Walgreens. The company reported Q4 2021 and full-year earnings on Thursday, demonstrating that brands selling through the big-box retail chain want something more.

Doug McMillon, Walmart CEO, said on the call that advertising is a “high margin” business that will continue to grow alongside the retailer’s Marketplace to eventually “become a top 10 ad business in the mid-term.”

“We expect this strong growth to continue,” he said.

The number of active advertisers using Walmart Connect -- previously Walmart Media Group -- grew more than 130% year-over-year, and about half of the ad sales came from automated channels in Q4, more than double last year.

“We expect Walmart Connect to continue to scale over the next few years with plans to become a top-10 ad business in the midterm,” he said.

For Walmart, the business model is changing -- it is becoming entrenched in ecommerce, and with online sales comes digital advertising.

“We've got a business that's becoming increasingly digital -- the ecommerce business, first party, third-party is growing,” he said. “It gives us the opportunity to grow advertising income. It's grown at a fast rate, and it's growing across markets.”

The U.S. is important market, but India, Mexico and others are growing, too. Margins help to keep prices low for customers and deliver the operating income number percentage, making the growth in the advertising business look good.