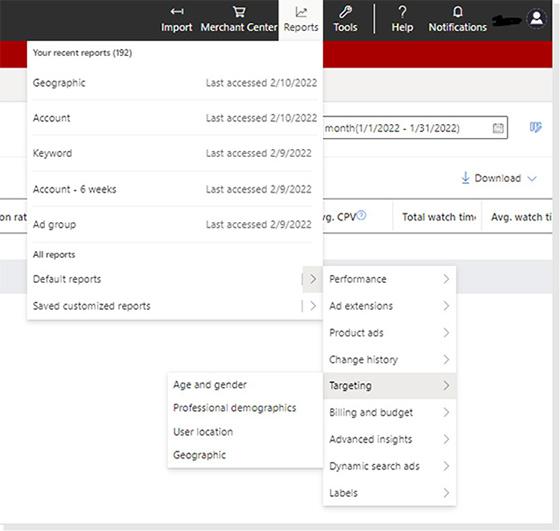 Marketing reports are generated for clients often -- much too often, according to some.

They typically use the same template, making the running of reports a tedious process.

Having the ability to select a recently run report or preview a new report can cut down on unnecessary steps that can save time.

Microsoft Advertising today released a major update in its reporting platform aimed at making it more intuitive, as ecommerce continues to skyrocket.

The majority of shoppers now begin their product searches on digital channels, and studies show that one in three store purchases begin online. Ecommerce will make up 63% of growth for all total gross merchandise value (GMV) between 2021 and 2026, outpacing every other in-store retail channel, according to Edge by Ascential, which brings data and insights to brands like Samsung and Kellogg’s.

The report predicts $2.4 trillion in GMV growth within four years.

Edge by Ascential expects online retail to account for nearly 40% of global retail sales by 2026, and store-based share of retail is predicted to decline from 69% in 2021 to 60% in 2026, driving up the opportunity for online advertising.

Microsoft’s change in reporting aims to help advertisers keep up with the increase in ecommerce by not only spending less time setting up and management campaigns, but better understanding the performance and the impact on business.

The series of changes, for example, are designed to process and produce reports 60% faster. There are new options for previewing information, as well as formatting options and shortcuts meant to streamline your process.

The system now allows advertisers to see real-time previews of the reports as they are created and modified. There are new capabilities around conditional formatting, inline edits, sharing, scheduling, saving, scope changes, and common shortcuts often used in Excel.

Automation has been a major push for Microsoft and Google. It’s being used to improve everything from marketing services to customer experiences. As algorithms improve, performance drivers may look toward hyper-automation.

Gartner expects hyper-automation to become one of the top three drivers of low-code adoption through 2022. What is low-code adoption? Rather than use complex programming languages, a low-code software development approach requires little to no coding to build applications and processes.

Microsoft’s new reporting structure works off the same principals, but I cannot confirm if it’s the same method, to reduce the amount of work marketers need to do to process a report.