A new report by market research and consulting company Million Insights says the global social media advertising market –– valued at $103 billion in 2020 -- is expected to reach $262.62 billion by 2028.

Million links this potential increase –– a compound annual growth rate (CAGR) of 12.4% –– to the rising number of social media users across the globe (currently 4 billion, over half the world’s population), its expansive use as a tool for companies and marketers, and its resulting popularity across a wide expanse of industries.

Mobile demonstrated the largest revenue of over 70% in 2020, and the report predicts this sector will grow the fastest, with an influx of social media users (who increased by over 13% in 2020). The report highlights around 5.2 billion unique mobile users (66% of the global population).

As more of the population shifts from traditional newspapers to digital platforms, the report expects the desktop segment to expand at a CAGR of 10.6% between 2021 and 2028. This market boost will be partly due an increased rate of affordable internet plans in emerging economies.

When looking at specific industries, retail held the largest revenue share of over 20% in 2020 and will only increase as social media continues to be used as the primary advertising tool for retail products. Consumer relationships via brands’ social media accounts are also credited as a major boost for market growth.

Million Insights also reports that North America dominated the market in 2020 with a revenue share of over 30% due to the increasing mobile and internet penetration rate. Consumers in the U.S. and Canada, specifically, tend to be the first to adopt emerging technologies and solutions such as social media.

Furthermore, the report says, half of U.S. shoppers remain loyal to brands and follow up on social media about sales and new product information, which further accelerates market growth.

Asia-Pacific, however, is expected to register the fastest CAGR of 13.2% between 2021 and 2028, due to a growing consumer base withincreased spending on social media advertising in emerging countries like China, India, and Japan. 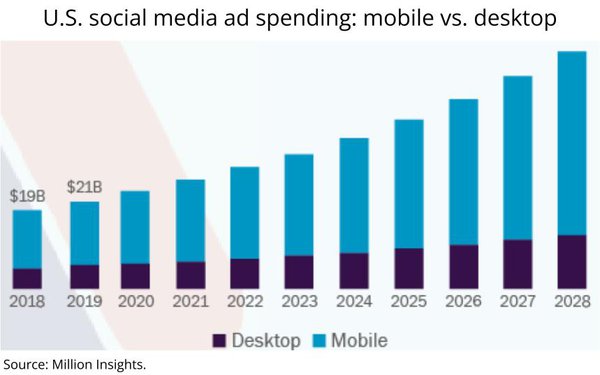