From 'The Social Network' To 'The World's Discovery Engine,' Why Zuckerberg Really Wants To Be Google 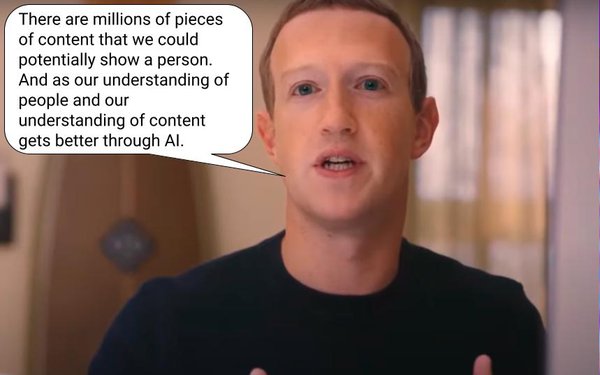 Listening to Mark Zuckerberg and his management team backpedal on Meta’s tepid first-quarter results, as well as its multibillion spending plans to build the “computing platform” of the future (ie. the “metaverse,” circa 2030), I was struck by how unimaginative, uncreative, and Borg-like the company and its team actually are.

Comparisons are often made between Meta and Apple, but the truth is, if Apple’s mantra was to “Think Different,” Meta’s appears to be, “Don’t Think, We’ll Do That For You.”

Much of the team’s spin was about how it was accelerating its investments in AI and machine learning to do just that, both for advertisers and for consumers.

For advertisers, Zuckerberg and Meta’s No. 2 Sheryl Sandberg focused on how new iterations of AI will compensate for Meta’s recent “signal loss” -- their term for getting caught flat-footed by Apple’s consumer privacy initiatives, which they attributed to much of the deceleration in its advertising growth and performance (Meta reported that total ad impressions rose 15%, but the average price-per-ad sold fell 8% in the first quarter due to a combination of those “signal losses,” as well as disruption in Eastern Europe due to Russia’s invasion of Ukraine).

“We’re making major AI investments to build the most advanced modeled infrastructure in the industry,” Zuckerberg boasted, adding: “We hope that this drives better recommendations for people, higher returns for advertisers and increases our revenue growth in the face of the signal loss.”

For consumers, Meta’s plans for advanced AI will mean using those models to curate more of what people see through feeds on Facebook, Instagram and Meta’s other “family” of apps.

Zuckerberg describes the goal of becoming “the world’s discovery engine,” which sounds to me like a plan to copy Google’s search engine, but to do it within the confines of Meta’s app family, which will also eventually include its version of the metaverse.

We’re “seeing a major shift in feeds from being almost exclusively curated by your social graph, or follow graph, to now having more of your feed recommended by AI, even if the content wasn't posted by a friend or someone you follow,” Zuckerberg explained about how Meta is utilizing AI to shift from the original social media value prop in order to enable his ambitions of becoming the world’s “discovery engine.” Or at least the one inside Meta’s world.

Later, in response to an analyst’s question, Zuckerberg expanded on his vision for Meta’s “AI-driven recommendations and discovery engine” plan:

“I think the biggest shift here is that now the universe of content that are candidates to show in a person's feed is way bigger,” he explained, adding: “It used to just be, ‘Okay, here are the people, here are the friends or businesses or pages that you follow.’ Maybe it was on the order of 1,000 or a few thousand potential posts a day that we could show and we built a new feed system that could help rank those to show the most interesting ones to you at the top.

“But fundamentally, that was more a challenge of ranking a relatively small number of posts in the order that would be optimal. Now it's a much more open-ended thing.

“There are millions of pieces of content that we could potentially show a person. And as our understanding of people and our understanding of content gets better through AI, we're now better able to, across all different content types, text links, photos, short-form videos, long-form videos, everything basically built to understand what the content is about, match it more with what people are interested in, which just means that there's a lot more candidates to show people.

“The social content from your friends, I think will continue being a lot of the most unique and valuable content in the system, so that will still be there. But in addition to that, you'll now have a lot of other interesting content.”

If that sounds a lot like universal search to you, then you probably agree with me that Meta’s big plan for the future is not to be “the social network,” or even “the metaverse.” It’s to be Google -- but in a much more self-contained (ie. inside Meta’s family of apps) universe. You know, the one it can actually monetize.

At a time when ad industry professionals, regulators and consumer advocacy groups are still trying to come to grips with Meta’s questionable management of information spread across social networks, why in the world would we want it to do the same for, well, the entire world?