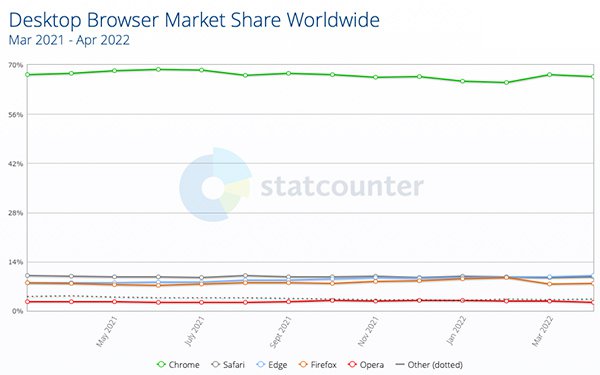 Microsoft Edge made significant gains in recent months -- officially, although slightly, surpassing Apple's Safari browser as the second-most popular option for the desktop worldwide, according to recent data as of April 2022.

This increase in market share may have contributed to an uptick in Microsoft Advertising’s business. More people are working at home from their desktops and laptops, and desktops running the Windows operating system come with the Edge browser and the Bing search engine installed.

Microsoft generated around $8.66 billion in revenue from Search and News Advertising for the nine months ending March 31, 2022 -- up from $6.73 billion in the year prior, according to the company’s 10K filing with the United States Securities and Exchange Commission.

Edge’s user base has slowly increased since Windows 11 officially launched in October 2021. It now holds 10.07% market share on desktop machines, putting it behind Google Chrome with 66.64% market share and slightly ahead of Safari at 9.61%, according to StatCounter.

The change was first noted on Tuesday by Gizmodo.

Firefox, which is in fourth place, has recently seen a slight drop in market share to 7.86%, down from 9.47% in February.

Microsoft Edge debuted in 2015, built on a proprietary browser engine the company developed. The original version of Edge failed to gain much acceptance, so several years later Microsoft rebuilt Edge on the same Chromium code base as Google’s Chrome browser.

Microsoft developed Edge to replace Internet Explorer, but the number of vulnerabilities grew and developers made a decision to discontinue the current version and rebuild it.  Microsoft and Google worked together to complete the project.

Microsoft will retire Internet Explorer in June and direct users to Microsoft Edge.

The company notes that customers are encouraged to move to Microsoft Edge with IE mode, which enables backward compatibility and will be supported through at least 2029.