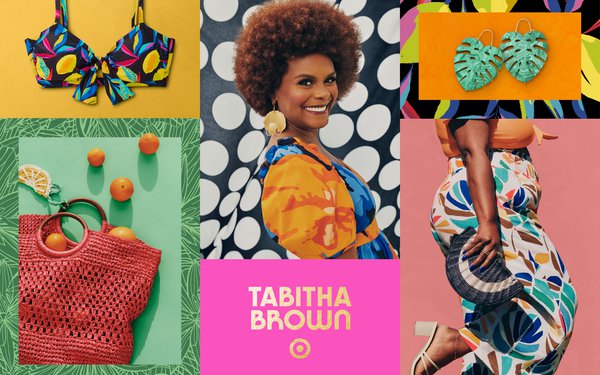 “America’s Mom” -- otherwise known as social media phenomenon Tabitha Brown -- is expanding her existing relationship with Target via four limited-time-only collections launching over the next year.

“Celebrated for her daily doses of encouragement, Tabitha Brown is teaming up with Target to deliver positive wellbeing and joy for guests through Brown’s vibrant and inspirational style,” reads a recent company statement.

Brown gained notoriety in 2020 when she was named one of TikTok’s top 10 creators, having amassed a following of 5 million for posting positive viral videos.

In the past three years, Brown has capitalized on her TikTok fame with a recurring role in Showtime’s The Chi, along with a YouTube original kids show, publishing a memoir titled Feeding the Soul, winning an NAACP Image award, co-owning a vegan restaurant, and more.

Now, after being an influencer partner with Target for the past 2 years, Brown’s new collections exemplify her range of interests and talents. “Tabitha Brown For Target” includes apparel, swim and accessories items, home and office, food and kitchenware, entertainment and more.

“This partnership and campaign is grounded in guest insights, based on the overwhelmingly positive response guests have had to Target’s existing relationship with Tabitha, and the joy and optimism guests are seeking and a renewed focus on wellness,” says a Target spokesperson.

While Target teamed with ad agency Mythology for the campaign’s creative concepts and execution, Brown played an instrumental role in marketing the campaign as well. As an expert influencer, she spoke directly to her millions of social media followers through self-directed videos.

“To me, joy comes from freedom, and I was free to be myself during this entire design process, which is reflected in the assortment. I hope my collections bring Target guests joy, love and optimism to their everyday lives,” says Brown.

Campaign touchpoints will run across Target stores, along with digital ads, social content, an experiential activation in Atlanta, out-of-home, and Target’s own print magazine called “T.A.B. Magazine,” of which Brown is on the cover.

Target says that by partnering with Brown, it is continuing to support Black-owned businesses and Black creators and designers as part of the company’s Racial Equity Action and Change (REACH) commitment.