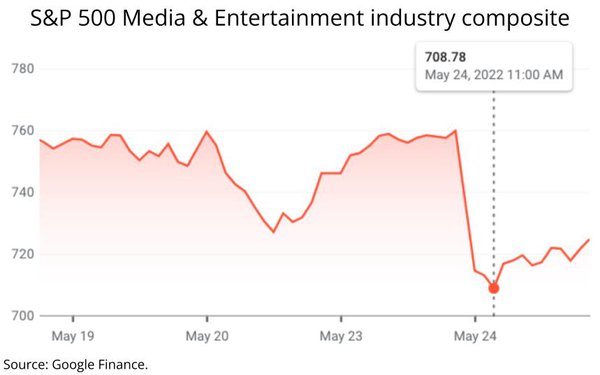 Michael Nathanson, senior research analyst/co-founder of MoffettNathanson Research, says there are some concerns that the second quarter advertising may end a bit soft -- even with the understanding that traditional TV is mostly dependent on a different set of advertisers than pure-play digital media companies.

“TV is more about brand [advertising],” he said, speaking on CNBC. Still, he added, “there is a realistic concern about what it means for TV and... other media as well. We’ll find out at the end of June if this hits other companies as well.”

Traditional TV-network-based media companies have already been bracing for a potentially weaker upfront TV advertising market -- set to commence within a week or so, where around $20 billion in ad messaging gets placed before the start of the TV season that begins in late September.

Near-term first- and second-quarter TV buying -- the “scatter” ad market -- has been weaker than usual, according to many estimates.

Scatter-based deals have been typical marketing indicators of what follows in the upfront ad market.

Many companies -- already impacted by a potential recessionary period to come --- sank to new 52-week lows. Media-stock survivors on the day were the more diversified media and communications companies.