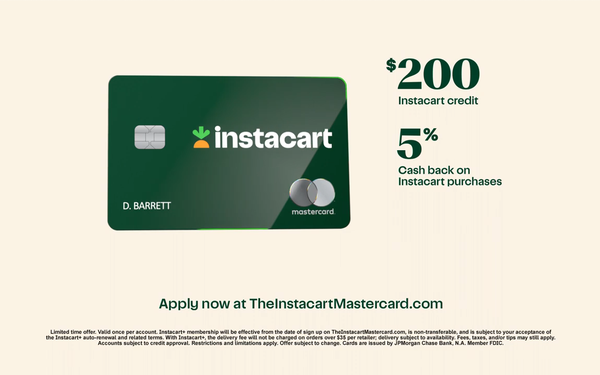 Instacart now offers a Mastercard Credit Card. The company announced a partnership with JP Morgan Chase on Friday, marking its first co-branded credit card. I’m almost tempted to jump in, but I live in the middle of nowhere in Wyoming without an Instacart delivery service.

The 30 second spot highlights how users of the new Instacart Mastercard get 5% cash back on Instacart purchases, $200 Instacart credit, and one year free of Instacart+.

The first 10,000 consumers to apply and be approved for the Instacart Mastercard will receive a $200 Instacart credit and one year of free Instacart+. There’s also travel, roadside assistance, lost luggage reimbursement, and travel accident insurance.

The co-branded campaign will reach consumers across multiple channels including over-the-top (OTT), online video, digital radio, out of home (OOH), and on Instacart’s and Chase’s owned-and-operated channels including email, digital, and social.

The campaign includes a first-ever appearance on Times Square billboards in addition to highly trafficked placements at World Trade Center.

Instacart has been busy marketing its services. At the end of June, the company launched a marketing campaign to support the debut of Instacart+, marking the first campaign to leverage its new brand identity.

A few months ago, in February, the company launched its first-ever, social integrated Super Bowl campaign, which celebrated those in it for the snacks. The theme, Here for the Snacks, was a collaboration with top TikTok creators.

And last November, Instacart launched its first-ever integrated brand campaign -- How Homemade is Made.