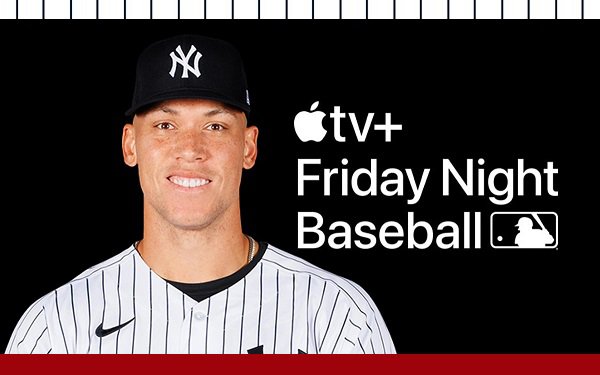 Many baseball fans in the Yankees home city of New York and around the country must have been stunned Friday night when they looked for the evening's Yankees-Red Sox game in all the usual places and found it missing.

In desperation, right around game time, they took to Google to find out where on Earth they could watch this crucial game.

The answer: None of the usual suspects -- regional cable (YES Network, the Yankees home channel), local broadcast TV (WPIX/Ch. 11, which sometimes carries Yankee games) and network TV (depending on the evening, a choice of ESPN, TBS or Fox, which carried last Thursday's game live in prime time).

Instead, Friday's Game 2, in which Yankee slugger Aaron Judge was poised to tie or surpass Roger Maris' 1961 single-season home run record, was to be seen exclusively on Apple TV+, a destination for this potentially historic game that comparatively few knew about beforehand.

To add insult to injury, the game was so exclusive to Apple that it was not even aired locally, as happens often when local sports teams are featured on a national TV network.

Apple reportedly refused overtures from YES Network officials when they tried to negotiate a deal with the august iPhone and streaming company that would allow YES to share the game.

YES stood to score high ratings with this particular game. But beyond that profit motive, YES officials were well aware of the game's importance to the Yankee faithful, who are understandably accustomed to finding almost all Yankee games on YES.

Not providing them with one of the most important games of the year was a slap in the face. And the fault does not lie with YES, but with Apple and its enabler, MLB.

“Years ago, a wise person once said: ‘Baseball is the greatest game of all in spite of the people who run it'," wrote New York Daily News columnist Bill Madden over the weekend, decrying the game's exclusivity on Apple and MLB's role in the situation.

Interest in the game was understandably widespread, even among many who were not regular Yankee watchers or even baseball fans.

Judge hit his 60th home run last Tuesday and was on pace to hit his 61st and 62nd sometime during a four-game series with the Red Sox that began last Thursday.

As of today, Tuesday, he had not yet accomplished this.

Last Friday's game was the second in the series. Since Judge had no home runs in Game 1, millions anticipated Friday night's game and the opportunity to witness baseball history in the making.

The problem is not necessarily that many do not have access to Apple TV+. The app is available in virtually all smart TVs, and certainly smart TV technology is commonplace in millions of households today.

Still, whether or not Apple TV+ is accessible -- or whether or not one is a subscriber -- the simple fact is that most people probably had no idea that last Friday's Yankee game could only be seen on Apple.

They probably took for granted that watching this game would be as effortless as every other game they ever watched.

Instead, many found themselves scrambling to find and then log on to Apple TV+. This may come as a shock to everyone who assumes the whole world knows instantly where and how to find Apple TV -- but in reality, this is not the case.

No matter how much breathless press the streaming-video business gets, none have the reach, or what you might call the “ease of reach” as broadcast and cable TV when it comes to traditional content such as a baseball game.

Apple got the game as part of a multiyear deal it struck with MLB for the rights to create a “Friday Night Baseball” franchise. Apple reportedly paid $85 million for the package, which was announced last March.

As part of the deal, Apple agreed to make all of its Friday-night baseball games available for free to non-subscribers. That was also true of Friday's Yankees-Red Sox game, which was free to all.

However, that is not really the point. The real issue is that millions of baseball fans in New York and elsewhere were completely unaware that the game would only be on Apple.

This group -- which Major League Baseball depends upon for its very survival -- should not have been put in a position to panic or fly into a Google frenzy just to watch this baseball game.