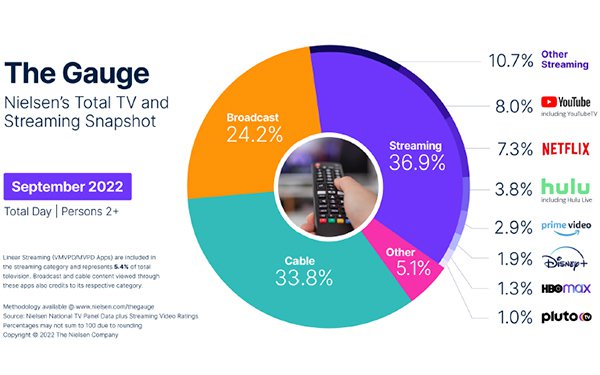 Still, on a year-over-year basis, total broadcast viewing volume was down 7.1%.

Nielsen says television usage as a whole was up 2.4% in September compared to August.

Hulu (including Hulu Live) also had a record high share -- 3.8%. It now sits in third place behind Netflix.  Amazon Prime Video (in fourth place) stayed at a 2.9% share versus the month before. Year-over-year “The Lord of the Rings: Rings of Power” and “Thursday Night Football” drove a 34.7% viewing gain.

HBO Max had a 1.3% share, and was up year over year usage by 10% from large viewing of “House Of The Dragon” and “Game Of Thrones.”