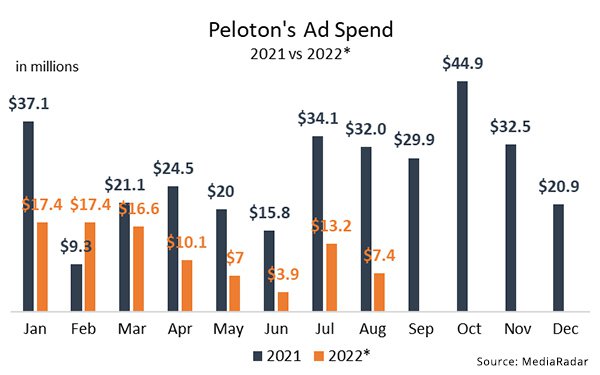 In addition, MediaRadar found that through August 2022, Peloton invested over $93 million. This represents a 52% YoY decrease in spend compared to the same period last year ($194 million).

“Peloton is working to stay afloat and are reducing investments across the board,” said Todd Krizelman, CEO at MediaRadar. “The impact to their marketing investment is sizable. It also has a trickle down effect on their publishing partners, as Peloton was a reliable advertiser prior.”

As Peloton overhauls its marketing strategy, MediaRadar also found that the company increased digital spend in 2022 -- rising from 30% in 2021 to 39%, with $36 million invested so far.

Krizelman believes these changes show that Peloton isn’t just cutting spend, but trying to put dollars in the online channel where they can better evaluate performance and outcomes.

Overall, the connected TV and fitness company has been struggling since becoming one of the pandemic’s most successful brands.

In August, CEO and president Barry McCarthy clearly questioned the validity of the business, stating that “naysayers will look at our fourth-quarter financial performance and see a melting pot of declining revenue, negative gross margin, and deeper operating losses.”

Less than two weeks ago, Peloton announced its fourth round of layoffs in 2022, in which it will cut another 500 jobs -- roughly 12% of its remaining workforce. McCarthy said he is now giving the company a six-month timeline to turn itself around and prove it is still a viable stand-alone operation.