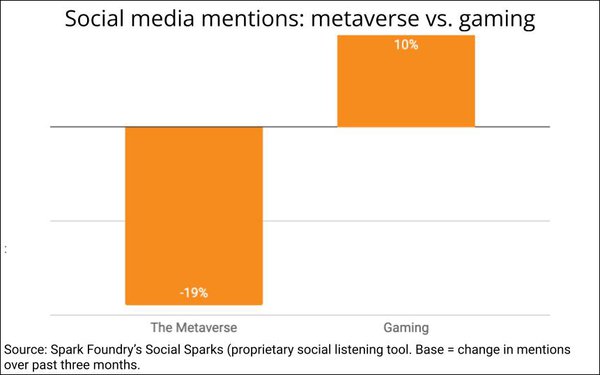 Following a flurry of attention after Facebook rebranded itself as Meta in order to go all-in on the metaverse, the term is beginning to wane among consumers -- if not industry insiders -- and in a new report, Publicis' Spark Foundry says it may already be time to rebrand the Web3 concept.

"The metaverse might need a new name," the agency asserts in a just-released report utilizing data from its proprietary social media listening platform -- Social Sparks -- showing that mentions of "metaverse" have eroded 19% over the past three months.

"There was a significant decline," the report notes, adding: "Rather than being a capsule term for all Web3, the term ‘metaverse’ is quickly being appropriated by those within the NFT community."

In fact, Spark Foundry says the term is becoming conflated with other Web3 jargon associated with minting crypto and NFTs, and is becoming less associated with what visionaries originally conceived it to be: the next-generation of virtual reality enabling new forms of commerce and social interaction and human experiences.

The study also found that the term "metaverse" is not that associated with other Web3 concepts such as "decentralized communities," or decentralized autonomous organizations (DAO), which meany believe is the real promise of Web3.

"Most startlingly, mentions of the metaverse are heavily linked to professionals rather than consumers," the report concludes, adding: "Commenters are six times more likely to work in finance and five times more likely to work in sales or marketing. In other words, most of the discussion about the metaverse is coming from those trying to sell it."

Conversely, Spark Foundry said discussions around social gaming -- which many believe is a precursor to the metaverse -- has jumped 10% in the past three months.

The agency did not offer a new name for the metaverse, just a declaration that the original term already is waning in usage and meaning.