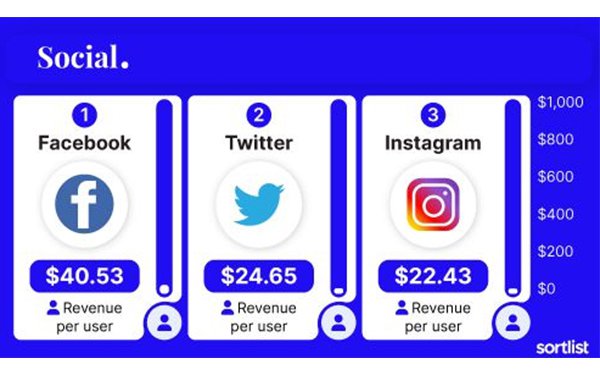 A new study by advertising services directory platform Sortlist analyzes the number of users among the leading apps across social media, entertainment and finance, and compares those numbers to each service's total revenue to calculate the amount each platform makes per single user.

Facebook makes the highest revenue ($40.53) per user. Despite its current struggles, the social networking service, owned by Meta Platforms, has made almost $118 billion in revenue, more than every other social media platform combined.

Twitter is the second-highest-earning social media app on the list, earning $24.65 in revenue per user. The social microblogging site has 206 million daily users worldwide, a total projected to increase to 340 million by 2024. The app was founded in 2001 and has since made over $5 billion in revenue.

Instagram is the third-highest-earning social media app in user revenue, with 2.1 billion active monthly users and an estimated revenue of $48 billion. The app makes approximately $22.43 in revenue per user.

In terms of entertainment, Hulu is the highest-earning app in terms of its revenue made per user. Hulu makes approximately $213.02 in revenue per user, which is considerably high considering the monthly subscription cost for Hulu's ad-supported plan costs just $6.99 per month.

The popular video streaming service Netflix is the second-highest-earning app on the list. Netflix has 192 million users and makes approximately $130.19 in revenue per user.

Live-streaming service Twitch is the third-highest-earning app on the list. With 22 million users worldwide, the app makes approximately $118.18 in revenue per user.

In terms of finance, FTX comes in first with a revenue per user of over $850. FTX is also the highest-earning app across all the categories analyzed.

Peloton is the highest-earning lifestyle app at $681.36 revenue per user -- although Wayfair, which placed second in this category, surpasses Peloton’s overall revenue by almost $10 billion.