Marketers Should Consider These Social Issues Before Reaching Out To Consumers 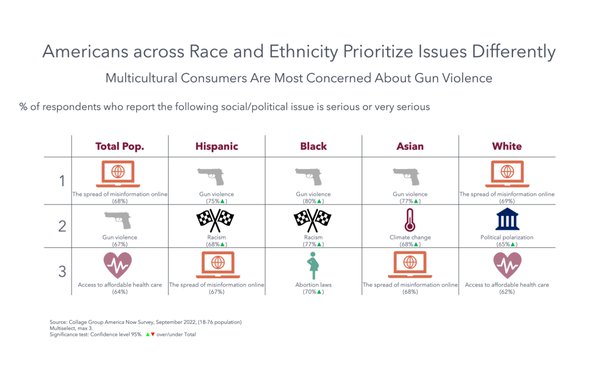 Despite the negativity that has been expressed in political ads and in discussions over the issues that most affect Americans, a Collage Group study on multicultural Americans that delves into social and political issues found 65% of overall American believe the United States is the best country in the world. Their reasons for this believing it is the best country differ based on age and ethnicity.

Most are “quite proud of their country,” with 75% of those polled stating they are proud to be an American, according to the annual report, America Now 2022: Harnessing American Identity to Navigate Social Issues, produced by cultural intelligence company Collage Group. About 4,000 participants took part in the study fielded in September.

Boomers are the proudest with 88% saying they are proud of their country. Most Americans, 65%, said that they believe the United States is the best country in the world. White Americans lead, with 69% sharing this perspective. By generation, once again, Boomers led the way as 82% said the U.S. is the best country.

When asked how worried are you about your financial situation, 82% of Hispanic Americans, 72% of Black Americans, 76% of Asian Americans, and 79% of White Americans said they were some or very worried.

Despite economic concerns, the finding reveal Americans still have strong faith in the “American Dream.” In fact, 78% of Black, Asian, and Hispanic American consumers say they have achieved or believe they can achieve the American Dream, as compared with 69% of White consumers.

White Americans were not as optimistic, with 12% stating they could no longer achieve the American Dream. White tied with Black Americans in one area, as 20% from each demographic said the American Dream was never attainable, regardless of how hard they worked.

The Collage Group report also looked at social and political issues, finding that multicultural consumers are the most concerned about gun violence. Among Black consumers, 80% said gun violence is serious or a very serious problem. Seventy seven percent of Asian consumers, and 75% of Hispanics consumers agreed.

Black and Hispanic consumers were also in sync in terms of racism being a high area of concern, with 77% and 68%, respectively, citing it as serious or very serious. Nearly one-third of Hispanic and Asian Consumers, and even more Black consumers seek out brands that support improving race relations.