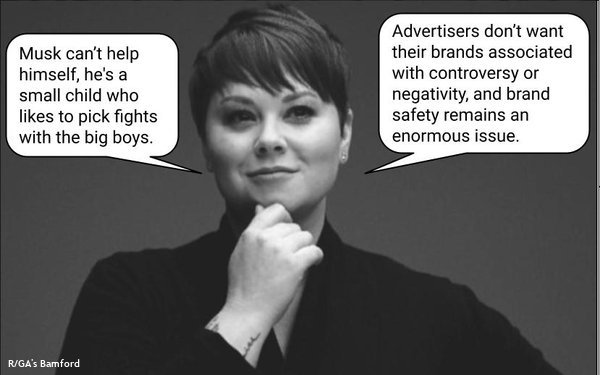 Wow, that was quick. Fastest platform war ever.

And all it took was for Tim Cook to take Elon Musk for a stroll around Apple's pond to call the whole thing off.

But the whole tiff -- Musk's "expose" that Apple charges third-party app developers as much as a 30% commission on their in-app revenues, that Apple was considering dropping Twitter from its App Store, and that Apple cut its ad spending on Twitter -- illustrates what a crazy news cycle Musk's tweets represent.

Honestly, it may even surpass the knee-jerkiness of the @realDonaldTrump account at the height of its gaslighting.

To be honest with you, I'm not sure I understand what Musk's long game is with Twitter, and I'm not going to even try and fathom it personally.

I'm more focused on his real-time behavior, policy changes, and the effect they're having on others. But I am struck by the views of other pundits.

Just yesterday, I was listening to Kara Swisher rattle off a litany of theories ranging from the notion that he's intentionally trying to undermine the value of Twitter so he can negotiate a deal to buy its outstanding debt back on the cheap to another that he's simply creating fires so he looks like a hero when he comes up with solutions that put them out and he can boast, "See -- the critics were wrong!"

Just this morning I received a dispatch from R/GA media chief Ellie Bamford that it might just be the good old-fashioned megalomaniacal narcissism that's been missing from Twitter since @realDonaldTrump stopped tweeting.

"Musk can’t help himself, he's a small child who likes to pick fights with the big boys," Bamford says, noting: "There’s zero evidence that Apple actually threatened Twitter with an App Store ban. Musk has been leaning into his frequent claims that Big Techs are fundamentally biased against conservatives. If Apple did actually ban Twitter, it would be a reflection of the wildly irresponsible choices Musk has made since taking over Twitter vs. an ideological or partisan action from Apple’s side."

I tend to agree with her, and I had some similar thoughts during the last 24-hour news cycle when Mark Zuckerberg piled on the feud, with his "it's problematic that one company controls what happens on the device" snipe.

Kind of like the kettle calling the pot black, when you think about it.

Yeah, sure -- Meta doesn't control devices, per se. At least not yet, although the whole reason it recasted itself from "Facebook" to "Meta" was literally to do exactly that.

The devices may not be conventional smartphones, tablets or computers that Apple exerts some control over, but Zuckerberg is betting -- and investing -- big time that they will be virtual reality (VR) devices that effectively do the same thing in the not-too-distant future. But on steroids, if you believe his metaverse hype.

Musk groused that Apple "secretly" charges a 30% "internet tax" to developers who sell things in-app that are distributed through the App Store, but earlier this year Meta disclosed it plans to charge developers nearly 50% for selling things through its "Horizon Worlds" equivalent.

The fact that walled gardens charge third parties that want to do business by reaching consumers they distribute to is not new. It's actually as old as advertising and media itself. The only thing that changes is the cut.

In the old days, analogue media charged 85% and rebated 15% to the ad agencies that placed the money with them. (Although direct response advertisers and agencies sometimes paid a direct piece of the action vis a vis "per inquiry" deals.)

In more modern digital media times, all sorts of vigs emerged for aggregators, gateways and walled gardens, ranking for early internet ad networks to the social networks and platforms themselves.

As much as Musk thought he was blowing the whistle on Apple's App Store cuts, the truth is that it's a well-known business practice used by the entire ecosystem. It's just a matter of how you look at it.

And most ironic of all, Meta essentially does the same thing, even before it starts shaking third parties down via access to Horizon Worlds.

It's called the Facebook Audience Network, and it's a big part of how Meta generates advertising revenues to this day.

And just like Google did via AdSense, Facebook had the leverage to take a piece of publishers' and app developers' action by granting them access to Facebook's users via its universal login.

None of this should be shocking or surprising to anyone who has been doing business in media the past couple of decades, or even the past couple of centuries. It literally is the underlying business model of media: A medium attracts and organizes an audience by providing content and experiences valuable to them and monetizes their attention by selling it to other third parties.

Often, those third parties are advertisers. But only when the audiences they're targeting and the content and environment they show up in are ones that are friendly to their brand.

And that's the most remarkable part of what Musk doesn't yet understand about the ad business.

He can kvetch all he wants about "censorship" and "free speech," and imply it's pressure groups, or other platform companies like Apple that also happen to be his biggest advertisers -- but the bottom line is: they're just not into you.

"Advertisers don’t want their brands associated with controversy or negativity, and brand safety remains an enormous issue," noted R/GA's Bamford. "Right now you see that brands are under terrific pressure and heightened scrutiny about where they invest and who they partner with. So, relaxing regulations/controls on the platform and essentially the Wild West ensuing makes it a dangerous place for brands to put media investment."

Maybe Musk just needs to tweak the Neuralink he's had implanted, because it's not yet working right.

Or maybe he's just playing a long game and we are just players in it.