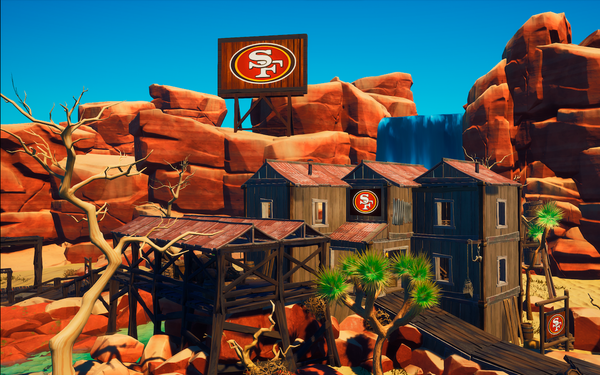 The National Football League (NFL) is continuing its metaverse exploration with the launch of “NFL Zone,” a metaverse experience built in Fortnite Creative, the popular online video game’s free game mode where players can craft custom maps and matches in a sandbox-game environment.

Presented by Visa, the NFL’s official payment-services partner, the new metaverse activation is designed to engage Fortnite players through an NFL-inspired social hub while also attracting new and existing football fans and deepening its commitment to creating interactive fan experiences in the metaverse.

Once inside the NFL Zone, fans will be able to take part in virtual tailgates, Visa-sponsored stadium and mini games, and portals to maps inspired by individual NFL teams that host their own version of the popular “search and destroy” team play game, now called “seek and sack."

The first team-inspired map, which launches on Thursday, will spotlight the San Francisco 49ers. The NFL says future maps will feature the Pittsburgh Steelers, New York Giants, and more in subsequent months.

“Through developing a robust catalog of content with top gaming personalities and pairing it with a persistent presence in the metaverse, we’ll be able to grow generational fandom off the field and enhance the connection audiences have with NFL football,” says Ed Kiang, vice president of video gaming for the NFL.

In addition, an NFC vs. AFC competition is built into the team-inspired maps, with participating content creators’ wins tracked on a giant scoreboard in NFL Zone. The division earning the most total points will be crowned champion after a final NFC vs. AFC playoff.

With over 80 million monthly active users, Epic Games’ Fortnite has become one of the leading metaverse gaming platforms over the past several years.

Similar to other metaverse gaming platforms like Roblox and Minecraft, Fortnite enables brands to capture the attention of a younger audience, as over 60% of players are between the ages of 18 and 24.