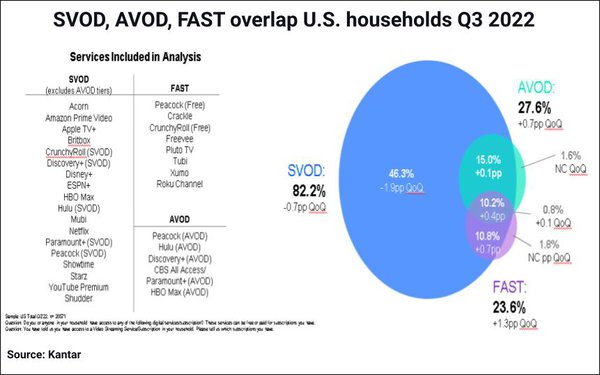 What proportions of existing U.S. Disney+ or Netflix subscription video-on-demand (SVOD) subscribers may opt to switch to their new ad-supported video-on-demand (AVOD) tiers for the price break?

Based on a Q3 survey of 11,435 U.S. video streaming customers by Kantar Entertainment on Demand (part of its larger sample of 20,000-plus U.S. digital entertainment subscribers, surveyed quarterly), one in four might be in the ballpark.

Among subscribers to other SVODs that already also offer AVOD tiers (Hulu, HBO Max and Peacock), an average of 22.8% reported switching from SVOD to ad-supported options in this year’s third quarter.

Given that Peacock (14%) and HBO Max (10%) had Q3 churn rates above the 9% average for streamers as a whole, and Hulu was at 9%, but up from 7% in Q2, a shift from their SVODs to their lower-priced AVODs, as opposed to cancels, may actually represent a positive trend.

And Netflix, which saw 38% of its cancellations attributed to cost, might benefit significantly from its upcoming AVOD option. 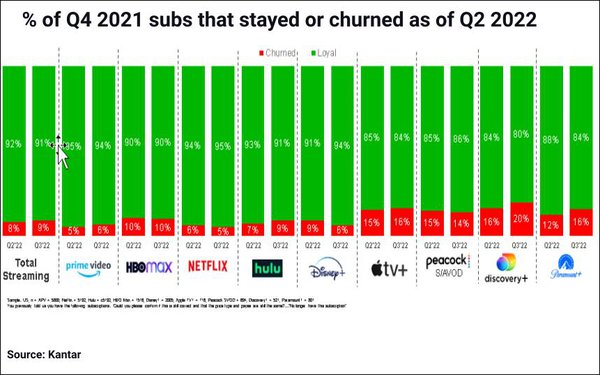 Overall, SVOD penetration is declining, with the decline driven by SVOD-only streamers. In fact, Q3’s one percentage-point decline versus Q2, to 82%, was entirely driven by Netflix, Amazon Prime Video and Showtime.

Growth is coming from streamers who have some combination of SVOD and FAST/AVOD. AVOD’s Q3 share was 28%, and FAST’s was 24% — each up by one percentage point from Q2.

The chart at the top of the page provides a summary of reported use of SVODs, AVODs and FASTs, and their overlap, in Q3.

15% have an SVOD plus at least one AVOD.

10.2% have some combination of SVOD, AVOD and FAST.

Subscription stacking overall grew in the quarter (with households accessing 5.2 video streaming services on average, up from 5 in Q2), including the proportion of new subscribers stacking.

In Q2, with the growth of AVOD far outpacing SVOD, it was clear consumers were willing to reduce the cost of their subscription repertoire by watching ads. But in Q3, SVOD (excluding Netflix, Amazon Prime Video and Showtime) and AVOD grew at similar rates, as stacking also grew.

Conclusion: Stacking and spending patterns indicate that consumers are sorting out which platforms they believe rate paying the top SVOD rate, and which they’re willing to view with ads in order to get a better price. 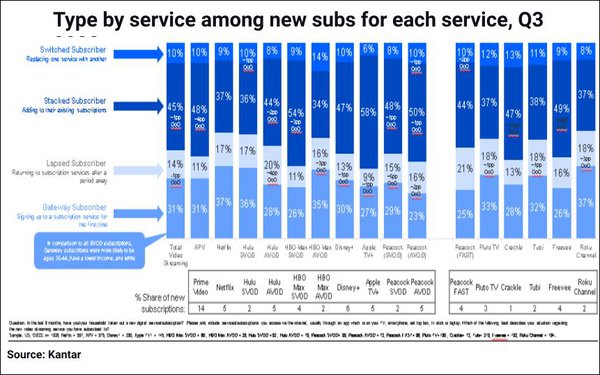 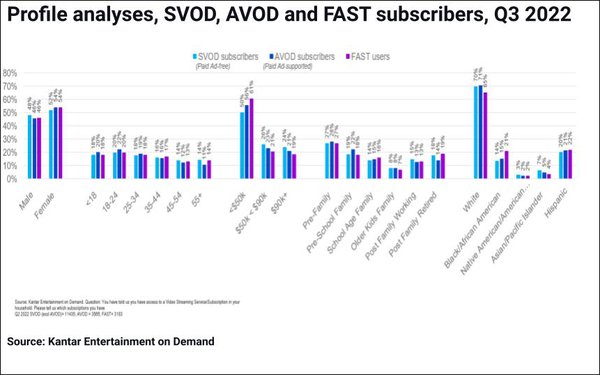