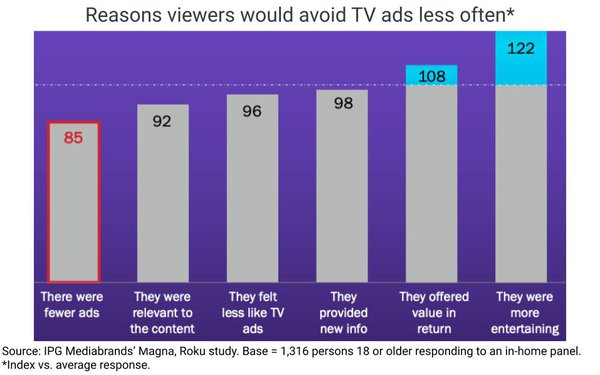 While TV viewers still don’t want to see many TV ads in the shows they watch, it's more important for them to see higher forms of “entertaining” advertisements.

The desire to see "entertaining" ads scored 60% in a research panel of 1,316 persons 18 years and older in response to the statement: “I would avoid TV ads less often if... they were more entertaining.” The second-highest preference among respondents was if advertising “offered value in return” -- at 53%.

Farther down the list was the ongoing issue of seeing too many ads. Forty-two percent of this panel said they would avoid TV ads less often if there were “fewer ads.”

“It is important to recognize that viewers can easily skip over advertising, but our study found they are less likely to do so if the ads are as entertaining as the programming and present a more enjoyable experience,” said Kara Manatt, executive vice president and managing director, intelligence solutions, Magna, in a press release.

In response to the question of what brands could offer viewers in terms of “value,” young viewers registered a positive 58%, compared to 52% for viewers 35-54 and 47% for those 55 years and older.