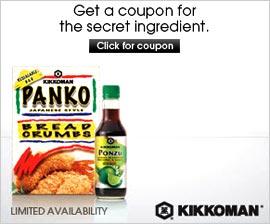 Kikkoman, a sponsor of Food Network’s “The Next Iron Chef: Super Chefs” since the show launched four years ago, had a first on the Dec. 4 edition of the show: a promotion for an online coupon during a product-placement segment.

Kikkoman’s Panko Bread Crumbs and Ponzu Sauces were featured in the “Secret Ingredient Challenge” segment of the show, in which an ingredient is revealed and two celebrity chefs must compete on the spot to create dishes that use it.

In this case, the chefs were challenged to create -- within 30 minutes -- new, sweet desserts using the Kikkoman products, which are normally associated with Asian-savory cuisine.

“This was a unique opportunity for us to alert ‘foodies’ and everyday cooks to recognize the many unexpected, different ways Kikkoman products can be used, and to encourage them to try the products at home in these new ways,” says Michael Evans, SVP, sales and marketing, for the brand.

Going into the commercials preceding the secret ingredient challenge, a screen banner encouraged viewers to visit the Food Network’s site to get a $3-off coupon good on either the bread crumbs or the sauces. This was the first time a coupon for a sponsoring/featured product has been promoted during the show, according to Howard Klein, SVP group management director in Chicago at Draftfcb, Kikkoman’s marketing agency.

“The coupon added value and took the products’ great presence on the show to another level, by providing viewers with an immediate incentive to follow through and buy them,” says Klein. Consumers who click into the Kikkoman coupon promotion on the Food Network site are taken to the SmartSource printable grocery coupon site.

Once the show aired, Kikkoman began promoting the products’ having been featured in the secret ingredients challenge and the coupon, using Kikkoman’s Kitchen and corporate Facebook pages, as well as reaching out to food bloggers.

The campaign also includes highlighting Kikkoman’s sponsorship of “Next Iron Chefs: Super Chefs,” which is one of the Food Network’s top-rated shows, through neck hangers on its products at retail, and through an ad in Good Housekeeping. In-store coupons are also being offered, through Catalina marketing.