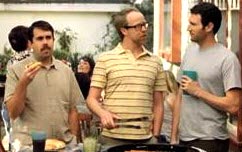 Sara Lee’s Ball Park brand is looking to appeal to the women who buy food for the men in their lives by affectionately ribbing the guys’ quirky behavior.

The tagline for Ball Park’s new campaign -- its first from Publicis Seattle, which became the brand’s agency of record in June 2011 -- says it all:  “Men. Easier Fed Than Understood.”

The campaign portrays humorous “guy time” moments, while also showcasing Ball Park’s expanded lines of franks. In addition to its classic franks, those lines now include Angus, 100% beef, turkey and “better for you” franks, each of which offers many varieties (such as “lite,” lower-fat, fat- free, bun-size, jumbo and deli-style).

The emphasis is on the products’ being “not just hearty and flavorful, but easy to prepare and fun to eat,” says Aaron Alt, the brand’s general manager.

The campaign spans TV, print, digital, social media, in-store activations and public relations. The brand’s site and Facebook page (which currently has about 138,000 “likes”) have also been relaunched. Both are featuring coupons, special offers and links to the brand’s YouTube area to view its TV spots.

The revamped site includes links to nutritional information for each of the many franks varieties, and as of Feb. 2, will also include easy, guy-friendly recipes; “guy- proof” grilling tips; a product locator (where Ball Park products can be purchased at retail); and an area with a “Guy Food Finder”/Ball Park’s history.

The spot plays on Ball Park’s baseball heritage (it was launched in 1957 in response to a request from the owner of the Detroit Tigers baseball team) in the context of a contemporary “guy moment”: Men standing around a grill during a backyard party, engaging in one- upsmanship about baseball statistics while grilling and eating the Angus franks. (After one guy says he’s “99.9% positive” about an old baseball stat, another replies: “So you don’t know.”)

Other TV ads will be rolled out over the next few months.