Search: Touch Me, Feel Me, Speak To Me 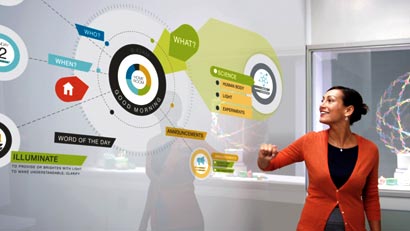 Waving your hands, speaking your thoughts, and touching the screen to interact with applications on smartphones, desktops, laptops, tablets and televisions might make you look like a lunatic to the casual observer, but these actions will become natural search techniques in the near future.

These simple tasks will power innovation where a microphone and a webcam will replace the search box on engines and Web sites. That's not really a futuristic idea, considering apps like Apple Siri, Evi, Google Voice, and Microsoft Kinect.

Microsoft recently released Kinect for Windows, a commercial development package that turns the game platform into software applications with help from Windows 8 for other industries, such as education, healthcare and retail.

Roy Chomko, president of Web and app development firm Adage Technologies, said an auto-wake feature would activate as someone walks up to a computer. The webcam recognizes the skeleton and identifies the person through facial recognition software. There's no need to reach and click on a mouse to interact with the machine. Voice commands built into software become available once the application recognizes the human. Microsoft made this possible through the Kinect for Windows development kit.

A Windows Live Messenger Client tied to Kinect and the Xbox allows users to make video conference calls through gestures on their television set, Chomko said.

Chomko believes companies may need to re-engineer some sites to support new metrics and keyword analysis based on voice, touch and gesture search. People talk differently than they type. "If I search for a Web development firm in Chicago, I would need to say 'Xbox,' and then give the command," he said.

The sentence structure would require a one-word command to wake up the device, followed by a sentence or string of words. Otherwise the software might pick up ambient noise in the room and become confused.

The Web site will need to consider how the interface handles gestures and voice. In the case of Microsoft Xbox, the interface can handle all three. That's important in the future for search engines, which will need to rethink how to present results when searching with voice or gesture.

Part of this change in search behavior across devices is the development of materials by companies, such as 3M and Corning, which will offer up 10-finger touchscreens on desktop computers and laptops, as well as on glass. This is the future of search.

Join us at the Search Insider Summit April 23, 24, and 25 in Captiva, Fla., to explore the possibilities.