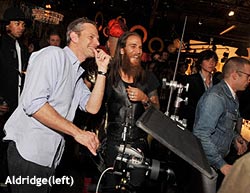 Mission: Create a campaign that authentically telegraphs “hip, cutting-edge and upscale” for your wine brand. Solution: Lure trendsetters to an exhibition of a famous photographer’s work, then use them as the models for a during-event campaign shoot.

That was the scenario orchestrated by Kim Crawford Wines on April 5 at New York City’s Cedar Lake Studios.

Notables from the fashion and media worlds were invited to an evening event showcasing the work of acclaimed fashion photographer Miles Aldridge. Upon arrival, they learned that the event was more than an exhibition: The willing were pulled onto elaborate sets to be shot by Aldridge as part of Kim Crawford’s new advertising campaign.

In a release, Aldridge said that he was intrigued by the challenge of shooting a campaign in the midst of a live event, and that he designed “playful” sets and scenarios that encouraged guests to be spontaneous, in order to capture “surprising and original” campaign imagery.

Each of three interactive sets portrayed an unexpected way to enjoy the wines. In one, brightly colored butterflies flew across an all-white lounge carrying bottles of wine to guests listening to music provided by a “couture-clad” pianist. In another, a character “magically” emerged from a painting in a fuchsia room to pour glasses of Sauvignon Blanc for a model swaying on a swing, as the cocktail crowd looked on. A third set had guests mingling at a dinner party in a modern kitchen with gold counters, eating gold-encrusted food as bottles of the wine chilled nearby in a tiger ice sculpture.

The campaign, launching this summer, will span online, print, outdoor and social media.

The print ads, to appear in magazines including Elle, Elle Décor, Harper’s Bazaar, Details, Dwell and Wine Enthusiast, are being created by Kim Crawford’s agency, 180LA.

Digital agency Organic, Inc. is working with the brand on a socially driven campaign employing Kim Crawford’s Web site, Facebook and Twitter pages. These elements will offer participants ways to “break out of routines” and share new perspectives on life, according to the brand.

Founded in the late 1990’s by husband-and-wife partners Kim and Erica Crawford, Kim Crawford Wines is a leading producer of luxury-priced Sauvignon Blanc. It was acquired by Vincor Canada in 2003. Vincor was in turn acquired by Constellation Brands in 2006.