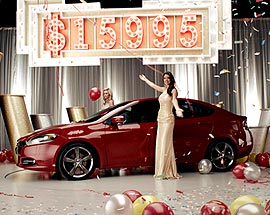 Chrysler's Dodge division is charging into summer with the launch campaign for the 2013 Dodge Dart compact car. The vehicle rolls into dealerships over the summer in tandem with the new ad push, "How to Change Cars Forever."

The TV, digital, in-cinema, print and out-of-home effort wraps both big-stage media buys and a focus on specific verticals in a message about innovation, creativity and the occasional missteps that go along with them. The campaign introduces a new tag line, "New Rules," in a 90-second TV spot set to the Jay-Z and Kanye West track, “No Church in the Wild." It also involves a partnership with Viacom around Comic-Con International in San Diego this summer.

The TV spot debuts July 10 during Major League Baseball All-Star Game telecast on Fox network. The automaker says the spot includes cameo appearances by a couple of athletes who are champions in their respective sports. The ad, offering a briskly paced historical review of inventions absurd and inspired, with the new Dart and how its features and performance make it an example of the latter, will also have 30-second and 60-second versions. It will air on major broadcast and cable networks and in movie theaters from July 20-Aug. 31, per the company.

Dodge will also be the official sponsor of MLB coverage on CBSSports.com in July and August, including a July 10 takeover of the CBSsports.com fantasy baseball page with an expandable gallery of vehicle images. When clicked, each image leads to the Dodge brand’s Web page for additional information.

Jason Russ, who heads up advertising duties for Dodge Division, tells Marketing Daily that the approach to pitching Dart was multifaceted by necessity: the compact-car buyer ranges across ages, psychographics, and economic conditions. "It made sense to get out and do things in multiple platforms to reach different mindsets. The compact segment is so large and touches such a large demographic; so we have Millennials in mind but are not ignoring the boomer market and their expectations."

One theme of the campaign, which was developed by Portland, Ore-based Wieden + Kennedy, is that there are over 100,000 ways to customize the car, per Russ. He says that while the launch spot touches on such features and benefits as 41-mpg fuel economy, integrated smartphone apps, and the sub-$16,000 starting price, more feature-focused creative will be among the half dozen or so ads for the car.

In addition to putting the “How to Change Cars Forever” ads on MTV, VH1, Spike and Comedy Central, the Viacom partnership includes a program launching this week called Dodge Dart Challenge: “Live in It to Win It.” Integrated into Viacom’s coverage of 2012 Comic-Con International in San Diego on Comedy Central, MTV, MTV2, Spike and VH1, the four-day challenge involves four superhero-costumed contestants competing for a chance to win a 2013 Dodge Dart. Each contestant will earn points by completing various skill challenges around the city both inside and outside the vehicle. Video coverage of the challenge will also be on www.dodgedartchallenge.com.

Russ says the Viacom deal around Comic-Con made sense because the event is as much about movie premieres, games, tech products and trends as it is about characters. Thus, it is popular with a range of tech-savvy creative types.

Similarly, Dodge has been doing a lot of social media to tout the new car to art-oriented types and will extend that tactic through the summer. The "Inspired by You" program involves partnerships with deviantART.com, ReverbNation.com, Transworld and Free Clothing Co. The idea is for subscribers to make Dart-inspired works of art, songs, clothing and skateboard decks, with the submissions getting visibility in a branded section of the sites.

Per the automaker, the contest with deviantART has so far reached more than 22 million registered members and led to some 4,000 traditional and digital art submissions. The top 50 entries are at Dodge's site www.redlinedodge.com.