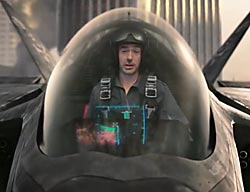 "Call of Duty" is one of the biggest franchises in video game history, and Activision is pulling out all of the stops for the latest version, “Black Ops II” to make sure everyone knows it exists.

During the Oct. 29 Monday Night Football telecast, the company unveils a 60-second commercial directed by feature film director Guy Ritchie and featuring Iron Man himself, Robert Downey Jr., as a man who brings a “jet to a gun fight.” Scored to AC/DC’s “Back in Black,” the commercial depicts gamers supposedly getting other players in their sights only to be upstaged by another gamer with more firepower uttering “Surprise.”

In addition to Downey, Jr., who upstages a man with two tanks by having a Harrier jet, the spot also features cameos from other celebrities including Omar Sy (a French comedic actor) and Internet celebrities FPSRussia and iJustine.

After debuting on Monday Night Football, the spot will roll out worldwide across high-profile telecasts including elite European football matches. In addition to the commercial, Activision will also takeover a free downloadable App, Action Movie FX, that allows fans to film real-world environments with their phones and then destroy those environments using the game’s weaponry.  Activision is also advertising the game through a global outdoor advertising campaign that will run in eight cities.

Activision has also partnered with LG Electronics to showcase the game’s 3D capabilities. A spot in that partnership showcases the games first-person game play and emphasizes some dialogue from the game in which a character says he can see “everything.”

The scale of the campaign is on par with its importance in the gaming world. Last year’s franchise entry, “Call of Duty: Modern Warfare,” surpassed $1 billion in sales in three weeks after its release. In addition to modern and futuristic warfare and weaponry, Black Ops 2 will also feature zombies.

“With ‘Call of Duty’ we are re-writing the rule-book of how games are marketed. This is more than a product launch, it's become a cultural event,” Tim Ellis, CMO of Activision Publishing, said in a statement. “Everything we do is geared toward reaching our fans – the best community in the world – to celebrate with them the launch this November 13.”