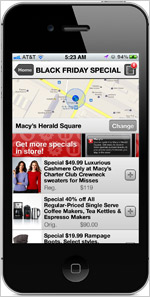 Add Macy’s to the growing list of retailers hoping for a merry mobile holiday. The store, which has already made significant investments in its mobile initiatives, is unwrapping a new Black Friday app for phones, available next week.

Macy’s, which has made a concerted push to win over smartphone-loving Millennials, is making its mobile experience more appealing. Created in partnership with eBay, the app will preview Black Friday specials, allow shoppers to write personal lists they can share, and get push notifications on specials. And once the chain opens its doors at midnight on Black Friday, the app steers shoppers toward specials within their local store.

It also previews exclusive merchandise, such as a new collection from MAC Cosmetics.

“Throughout the holiday season, we will be offering our customers new and fresh merchandise assortments, great value and an engaging shopping environment at both Macy’s and Bloomingdale’s,” Terry J. Lundgren, CEO, says in its release, “in store, online and via mobile devices.”

Separately, Macy’s unveiled its new holiday advertising, a TV spot that lets Kris Kringle, star of the 1947 “Miracle on 34th Street,” mix it up with Macy’s current spokespeople, including Justin Bieber, Carlos Santana, Martha Stewart, and Taylor Swift. The company, now five years into its “Believe” campaign at Christmas, says 30- and 60-second versions of the JWT-created spot will air throughout the holidays.

And once again, the Cincinnati-based chain is asking believers to bring letters to Santa to its stores, with each letter generating a $1 contribution to Make-A-Wish, up to $1 million.